I'm as disappointed with the Super Tuesday "turnaround" as anyone. But one very interesting thing is going to come out of this. We're going to have a bon fide, card carrying neo-liberal going head-to-head with a bona fide Democratic Socialist. Which means we're (once again) going to have that "national conversation". Assuming Warren and Bloomberg drop out of the race, it'll be just "Smokin' Joe" vs "Crazy Bernie", prime time, on the debate stage, and crisscrossing this land, speaking their polar opposite views. Bernie's incomparable critique of the "Establishment" and the "status quo" will be refined and custom tailored to his current opponent: and the world will be forced to hear every word of it. No more whispering behind closed doors and on lefty web sites. "They" can't limit the debates at this point. And Joey will continue being the inept, uninspiring placeholder for inequality, imperialism and regressive politics he's always been. And, Bernie will continue to be the passionate, energetic, idealistic, unprecedentedly inspiring phenomena he's always been. The national spectacle of Biden woefully inadequately "defending" the indefensible could actually prove historic.

That doesn't mean Bernie will win. There's a huge portion of even Democrats who are doing just fine (economically and otherwise) and who don't need, or want, the kind of change Sanders is talking about. And let's be honest; Sanders has a huge, ongoing black voter problem. It kept him from winning in 2016 and it just might again. It's not him, personally. But, I'm Jewish and painfully aware of the tensions that have existed for a very, very long time between the black community and the Jewish population, in general. The history of those tensions is generations long, and fairly complicated. But that is the tragic state of affairs.

One of the other significant developments is the surge of voter turnout from 2016. In some states it actually doubled. I think this is partially because Hillary was (is) so despised that about that many people just couldn't bring themselves to vote for her last time around. Biden may not be inspiring, but at the moment he's fairly well-liked (by those outside of OEN"). Will Sanders do to Biden what he did to Hillary? People forget, but when Sanders entered the Democratic Primary in 2015, Hillary Clinton was one of most admired and popular women in America. Bernie was the primary architect of her downfall. Will he do it again, this time to Biden? I think we all got a glimpse of what Sanders has in mind in that regard, during his speech to his supporters last night. We'll see.

But, the real reason for the record turnout is that the primaries are starting to hit their stride and the Party is priming itself for November, what's at stake being so, very crystal clear. So, they're ready to come out, in droves, no matter who's nominated. Apparently they can't wait! The turnout, of course, had absolutely nothing whatsoever to do with Biden's personal magnetism. I believe it was simply a function of our terrifying, current political reality, and that alone could very well at least keep Trump from getting re-elected. It would be just unfortunate if Biden is the beneficiary of it.

But, the "conversation" will happen. Perhaps Sanders can still pull out a win, or maybe he will just push the Democratic party still further leftward. But, once again, America won't be able to avoid hearing the real issues facing the nation.

No distractions. Up close and personal. Mano a mano.

And, any way you look at it, that's very much for the best. 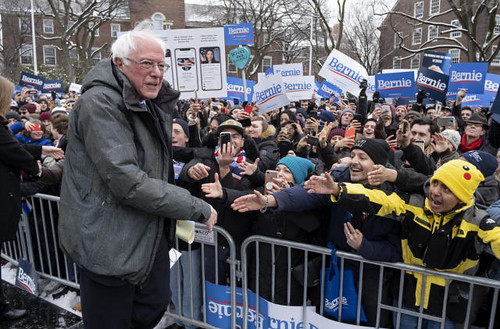 Related Topic(s): America; Best American President; Change; Democratic; Democrats; Inequality; Issues; Other; Other; People; (more...) People; Politics; Population; Reality; State; Time; Time; Trump, Add Tags  (less...)
Add to My Group(s)
Go To Commenting
The views expressed herein are the sole responsibility of the author and do not necessarily reflect those of this website or its editors.