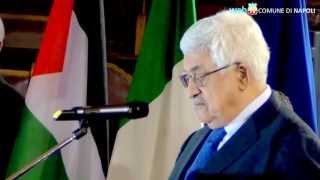 WHEN I first met Yasser Arafat in besieged Beirut, in the summer of 1982, Abu Mazen was not present. But when I met him again in Tunis, a few months later, he asked me to meet Abu Mazen, too.

Abu Mazen, it transpired, was the Fatah leader in charge of Israeli matters.

MY FIRST impression of Abu Mazen (Mahmoud Abbas) was that he was the exact opposite of Arafat. He looked like a schoolmaster.

Arafat was an outgoing type, who liked to embrace and kiss people and to establish close relations from the outset. Abu Mazen was much more reserved and withdrawn. Yet I liked his personality.

Even then, more than 35 years ago, he belonged to the first rank of the Fatah and PLO leadership, side by side with people like Abu Jihad (who was killed by Israel), Abu Iyad (who was killed by Palestinian extremists), Farouk Kaddoumi (who objected to Oslo and was excluded).

I met with Abu Mazen every time I visited Arafat in Tunis. When I heard that he was originally from Safed, the mixed Arab-Jewish town in northern Palestine, this was an additional bond. Safed was the second home of my wife, Rachel, who, as a child, went there every summer. Her father, a children's physician, practiced there in the summers, too. Abu Mazen could not remember whether he was ever treated by him as a child, before his family had to flee in 1948.

After the assassination of Arafat (as I believe, without proof), Abu Mazen assumed the leadership of both Fatah (the party) and the PLO (the semi-government). He is no second Arafat -- he has neither the heroic stature nor the international status of the Founder. But he was accepted by all.

As the leader of a small and weak people, faced with a much stronger adversary, Arafat believed that the Palestinians must use all the few instruments at their disposal: organization, diplomacy, violence, whatever. But after the Yom Kippur war, he started on the path to Oslo. As he explained to me: "I saw that after an initial huge victory of surprise, the Arabs lost the war. I realized then that there was no way to recover our country by war."

I think that Abu Mazen did not believe in violence to start with. It is not in his nature. He believes in the great Arab weapon: patience.

Arabs have a very different concept of time from Jewish Israelis -- we are impatient, we need instant gratification. Our political history is short, our state came into being just 70 years ago, we have no patience whatsoever.

Arabs have a long, unbroken history, with many ups and downs. They are used to waiting. Patience is a mighty instrument.

I believe that faced with the might of Israel, that is the real doctrine of Abu Mazen -- wait patiently until conditions change, let Israel exhaust itself. In the meantime, hold on, cling to the soil, don't give up an inch, what the Arabs call "Sumud." It may take one, two, three generations, but in the end we shall win.

This may not be a popular strategy, not a glorious one, but it may prove effective over time.

This, at least, is my conjecture. Nobody told me so.

Related Topic(s): Israel; Jerusalem; Palestinian; President Mahmoud Abbas; Zionists, Add Tags
Add to My Group(s)
Go To Commenting
The views expressed herein are the sole responsibility of the author and do not necessarily reflect those of this website or its editors.