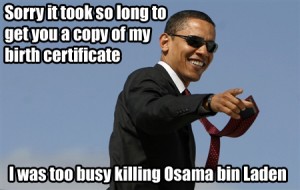 I bet Bin Laden regrets allowing his iPhone app to "use his current location."

If the reports are correct, then President Obama succeeded where the Bush Crime family failed for seven years in taking down Osama bin Laden, titular head of al Qaeda and alleged mastermind of the 9-11 terror attacks. News reports late last night jammed our in-boxes, swamped "Twitter," and preempted our local newscasts. TV viewers around the globe tuned in as President Obama spoke the words Raisin Brain only dreamed of uttering:

"Today, at my direction, the United States launched a targeted operation against that compound in Abbottabad, Pakistan. A small team of Americans carried out the operation with extraordinary courage and capability. No Americans were harmed. They took care to avoid civilian casualties. After a firefight, they killed Osama bin Laden."

Good thing bin Laden was killed rather than captured and brought to trial. It would have been uncomfortable for us to watch his defense team explain the partnership between his family and US oil interests for over 30 years, and how much support the US Defense Department gave him and his "resistance fighters" in the Afghan war against Russia in the 1980s.

We have an uncanny ability to relabel freedom fighters as terrorists and re brand them "evildoers" as suits our current political/economic purposes (see: Saddam). Seems that potential trial is one episode of Court TV the administration decided we could do without.

So . . . Is it over now?  Can we gather up our artillery, our assault weapons, our depleted uranium bullets, our water boards and our carpet bombs and go home? The Department of Homeland Security has abandoned its "rainbow of terror" charts, the Pentagon no longer circulates decks of cards emblazoned with terrorist photos, there is no call for citizens to play terrorist watchdog in their lobster beds, post office waiting rooms, community centers, and bus stations.

The sad truth is, America is probably less safe now than when Osama and his league of America-haters were plotting their attacks. In their atrocities following the attack of 9-11, the Bush administration itself served as al Qaeda's chief recruiting tool.

The murderous, illegal invasion of Iraq, the slaughter and maiming of innocents in Afghanistan, the water-boarding and other heinous "enhanced" interrogation techniques, the inhumane treatment of illegally detained so-called "enemy combatants" at GITMO, the war crimes and torture at Abu Graib, the outright graft, theft, and corruption that define our  actions in the Mideast and our attacks on the Muslim world were more successful in motivating followers of the Prophet to join the effort against America than any video directive ever (allegedly) issued by bin Laden.

Taking down bin Laden was at one time the stated main objective of the never-ending Bush terror wars. The definition of victory in their "war" was never clarified, but now that the central evildoer has been removed, isn't the mission accomplished? Can the troops finally come home, or must they continue to kill and be killed in the pursuit of "democracy" in societies in which tribal law reigns -- as it has for millennia -- supreme?

Kathy never expected a career in radio as a talk show producer. Born and raised in Atlanta, Georgia, Kathy was completing her nursing degree when in 2001 - in an emergency - she was asked to fill in as the producer of Mike's program. Within a few (more...)
Related Topic(s): Osama Bin Laden, Add Tags
Add to My Group(s)
Go To Commenting
The views expressed herein are the sole responsibility of the author and do not necessarily reflect those of this website or its editors.