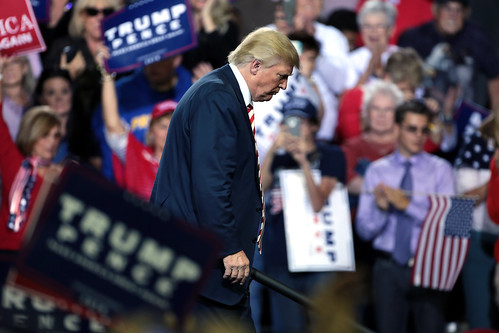 Now, in her new book Too Much and Never Enough: How My Family Created the World's Most Dangerous Man (New York: Simon & Schuster, 2020), Dr. Mary Lea Trump (born in 1965; Ph.D. in clinical psychology, Adelphi University) describes her family and especially her Uncle Donald ("Tweety") Trump (born in 1946). In addition to the two of them, the three other Trump family members who are most important in her book are the following:

As a clinal psychologist, Dr. Trump reminds us how important it is for an infant and toddler to form attachments to his or her parents (see esp. pages 23-27). However, in the case of the infant and toddler Donald, he did not form a secure attachment bond with either of his parents.

More specifically, I would say that as an infant and toddler, Donald formed a fearful-avoidant attachment pattern to both his two parents.

Now, despite the infant and toddler Donald's understandable fearful-avoidant attachment pattern with his mother, young Donald evidently grew more defiant and contemptuous of his mother - until his father sent him away to the private boys' boarding school New York Military Academy when he was thirteen (1959-1964) - which provided him with what might be styled as a kind of institutional "father" substitute experience that his own father was incapable of providing for him as a teenager.

Dr. Trump tends to describe her Uncle Donald as "institutionalized" (her term), by which she means that he tends to be enmeshed in institutions and institutional structures that in her estimate protect him from the challenges of the real world - the kinds of challenges that are inescapable for most people.

Briefly, pertaining to her grandfather's business practices, Dr. Trump portrays him as a hard-bargaining but basically racist businessman who knew how to ingratiate himself with powerful Democratic politicians and win government contracts.

However, despite Donald's deep fearful-avoidant attachment pattern with his father, young Donald, in effect, later learned to identify with his cold and ruthless father well enough that he eventually replaced his older brother, Fred Trump, Jr. (Mary Trump's father), as his father's heir apparent in the dysfunctional Trump dynasty.

Dr. Trump's book includes acknowledgments (pages 213-214) and an index (pages 215-225) and a short note about the author (page 227), but no bibliography - which seems to suggest that she is drawing extensively on her own personal memories supplemented by family lore to construct her account of the dysfunctional Trump family.

For another account of Donald ("Tweety") Trump, see Dr. Justin A. Frank's book Trump on the Couch: Inside the Mind of the President (New York: Avery/ Penguin Random House, 2018), which includes a handy glossary of psychological terms (pages 239-257) and a bibliography (pages 259-263).

But also see Dr. Frank's earlier book Bush on the Couch: Inside the Mind of the President, 2nd ed. (New York: Harper, 2007, esp. pages 199-204). Briefly, Dr. Frank intimates that the fearful-avoidant pattern tends to orient the person toward accessing and expressing hate - a pronounced tendency in President Tweety Trump.