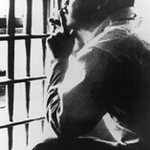 I never met Rev. Martin Luther King, Jr., or attended a march or rally where I could hear him speak, but on the evening night of April 4, 1968, an hour or so after he was assassinated, I was in a jail cell in Concord, Mass. writing a freshman paper about King, Gandhi and Thoreau, and their shared ideas about the power of non-violent political protest.

It had all started out when I found myself blocked, unable to get started on an end-of-the-term paper for my philosophy class at Wesleyan University in Connecticut. The topic I had chosen was tracing Martin Luther King's political roots back through the thought and practice of Indian independence leader Mohandas Gandhi and philosopher and anti-war protester Henry David Thoreau.

Stuck for words, I decided on a whim or in desperation on the morning of my birthday to hitchhike, for inspiration, up to Concord and to Walden Pond, where Thoreau famously had built a small cabin in which he was living when he wrote Walden, and also his famous and hugely influential essay On Civil Disobedience -- the latter work by way of explaining his decision to refuse to pay his taxes because of what he considered the United States' illegal war against Mexico.

The US was, of course, at the time of my little journey, waging a similarly illegal and far more vicious and destructive war on the people of Vietnam, Laos and Cambodia -- a war that I had already decided a year earlier that I would not participate in.

I had, the prior October, gone down to Washington DC to participate in the historic Mobe March on the Pentagon, and had been arrested on the Mall of that huge building dedicated to war, spending several days locked up in the federal prison at Occoquan, Va. on a misdemeanor charge of "trespassing" on federal property (I got a five-day suspended sentence and was fined $50).

I had made a firm decision while still in high school that I would not allow myself to be drafted, and was waiting to be called up, when I would have to face the consequences of that refusal, having decided not to file for a student deferment while in college, which I decided was unfair to those young men who were not able to go to college to escape the war. (My being called up was a certainty given my lottery number of 81.)

One of the big influences in my decision, shortly after my 18th birthday in 1967, to go to the local draft board and register for the Selective Service, at the same time telling the woman staffing that office that I would not allow myself to be drafted, was reading about King's momentous address at Riverside Church in New York, made on April 4 of that year, in which he clearly linked that criminal war and its violent repression of the Vietnamese people to the brutal racism and class struggle at home in the US. (I urge all reading this article to take the time to listen to Dr. King deliver his Riverside speech "Beyond Vietnam". It's available right here.) It was a lot to take in for an 18-year-old high school kid but King made it all crystal clear that all these things were connected, and that making real change meant tackling them all with a broad coalition. (Many, myself included, believe that it was that speech, so threatening to the Establishment power structure, that sealed King's fate a year to the day later, with a bullet whose timing seemed ominously designed to exactly send that message.)

My short time spent in a dormitory cell at Occoquan six months later, while short, was probably the most important time in all my four years of undergraduate college study. Locked up with me in that cell were hardened veterans of political action, in particular the civil rights struggle against segregation and for the right of African Americans to vote in the South. These veterans of the struggle, along with other veteran leftists caught up along with me by the Federal Marshalls guarding the entrance to the Pentagon, became the impromptu adjunct faculty of a makeshift "people's university" who opened my eyes to the wider issues of US imperialism, racism and the corrosive, destructive role of capitalism in America. They helped me to refine what King had said a year earlier.

It was with all that swirling in my mind, and with the knowledge that the war in Indochina had become even more serious and violent following the Viet Cong and North Vietnamese Tet Offensive earlier that year and President Lyndon Johnson's subsequent surprise announcement wees earlier that he would not seek re-election that year, that I headed out on the road for Concord on the morning of April 4, 1968. It at least appeared (wrongly it turns out), that the tide had turned and that perhaps the anti-war movement of which I was a tiny part was helping to end the war, and perhaps might also eventually lead to positive changes in the US, too.

At any rate, at the time King was slain, I was out in the early evening, under darkening skies that threatened rain, making my way by thumb along secondary roads in Massachusetts trying to get to Concord and to my destination, Walden Pond. I didn't know that the main subject of my paper, yet to be written, had already been shot and was being rushed to the hospital to be pronounced dead as I walked the last mile or so to the little park that contains the pond.

Reaching the park at dusk, I wandered around until I found the marked spot, a slight depression in the ground, where Thoreau's cabin, long since rotted away, had been. Figuring it was where I should bed down, I spread out my much too light sleeping bag and crawled in, just clouds began to release a cold drizzle a light rain. I pulled the bag over my head, took out my flashlight, opened my notebook, and pondered how to start the paper.

Before I could write a word though, a gruff voice rang out. "What the hell do you think you're doing?" I heard. Sticking my head out of the bag, I found myself looking up at a large police officer who was shining his flashlight down at me.

I explained to him that I was a college student and that I had come to Walden Pond to write a paper on Thoreau's and Gandhi's influences on Martin Luther King. He replied, shockingly, "Yeah, well they just shot him. He's dead!"

I was dumbstruck! How could this be? I asked for more information and the cop just said, "Someone shot him in Memphis."

Related Topic(s): Anti-war; Assassination; Gandhi; Henry David Thoreau; Martin Luther King Jr; Pentagon; Racism; Vietnam War, Add Tags
Add to My Group(s)
Go To Commenting
The views expressed herein are the sole responsibility of the author and do not necessarily reflect those of this website or its editors.