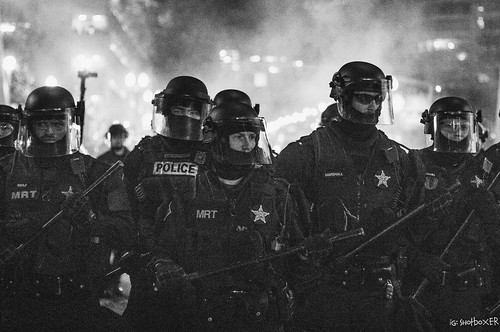 Forget everything you've ever been taught about free speech in America.

There can be no free speech for the citizenry when the government speaks in a language of force.

What is this language of force?

This is not the language of freedom.

This is not even the language of law and order.

Unfortunately, this is how the government at all levelsfederal, state and localnow responds to those who choose to exercise their First Amendment right to peacefully assemble in public and challenge the status quo.

Recently, this militarized exercise in intimidation complete with an armored vehicle and an army of police drones reared its ugly head in the small town of Dahlonega, Ga., where 600 state and local militarized police clad in full riot gear vastly outnumbered the 50 protesters and 150 counterprotesters who had gathered to voice their approval/disapproval of the Trump administration's policies.

To be clear, this is the treatment being meted out to protesters across the political spectrum.

The police state does not discriminate.

As a USA Today article notes, "People demanding justice, demanding accountability or demanding basic human rights without resorting to violence, should not be greeted with machine guns and tanks. Peaceful protest is democracy in action. It is a forum for those who feel disempowered or disenfranchised. Protesters should not have to face intimidation by weapons of war."

A militarized police response to protesters poses a danger to all those involved, protesters and police alike. In fact, militarization makes police more likely to turn to violence to solve problems.

You want to turn a peaceful protest into a riot?

Bring in the militarized police with their guns and black uniforms and warzone tactics and "comply or die" mindset. Ratchet up the tension across the board. Take what should be a healthy exercise in constitutional principles (free speech, assembly and protest) and turn it into a lesson in authoritarianism.

Related Topic(s): Intimidation; Law And Order; Martial Law; Militarization; Police; Police Attack Journalists Media; Resistance, Add Tags
Add to My Group(s)
Go To Commenting
The views expressed herein are the sole responsibility of the author and do not necessarily reflect those of this website or its editors.