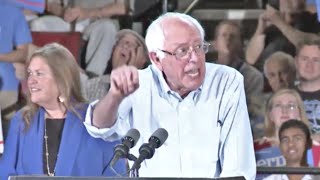 I believe that historians will look back at the early morning hours of Dec. 2, 2017, and conclude that it was one of the great acts of thievery in the history of the United States.

Let me be very clear about what is happening here. It is an extraordinarily cynical "two-step" process. First, Republicans are looting the Treasury. They are stealing trillions of dollars from the American people in order to give huge tax breaks to billionaires and large corporations. Second, as their tax breaks increase the deficit by $1.4 trillion, they will come back and, in the name of "deficit reduction," propose major cuts to Social Security, Medicare, Medicaid, education, nutrition, affordable housing and other programs desperately needed by the shrinking middle class.

This is class warfare, led by the Koch brothers and other wealthy Republican campaign contributors. More for the rich. Less for working families. Our job now is to stand up and fight back.

That is why last weekend I spoke to large crowds in Louisville, Kentucky, Dayton and Akron, Ohio, and Reading, Pennsylvania. Over 5,000 people took time out of their weekend to attend these high energy meetings in person and almost one million watched on-line. At these rallies activists heard not only from me, but from working people, DREAMers, nurses, Planned Parenthood patients and others about how this tax bill would negatively impact them, their kids, their parents and the future of our country.

Everyone made it absolutely clear that we need to keep fighting against this disastrous piece of legislation and not stop until we defeat it.

This legislation now goes to something called a "conference committee" where the House and Senate work out the differences between their respective bills. Then, the bill comes back for final passage. That means we probably have about three or four weeks to educate and organize the American people to defeat this dangerous bill. Please, get on the phone to your House and Senate members. Email them. Spread the word to your friends by social media. Talk to your co-workers. In the midst of massive income and wealth inequality, this country does not need more tax breaks for billionaires.

I will not stop until we defeat this disastrous piece of legislation. But I cannot do it alone.

One point I made clear at each stop on this trip is that Donald Trump, Paul Ryan and Mitch McConnell have a plan.

Mark my words. Once they pass this bill, they will claim we need to deal with the deficit by cutting Social Security, Medicare and Medicaid. You don't have to take my word for it. Here is what the New York Times wrote this weekend:

"As the tax cut legislation passed by the Senate early Saturday hurtles toward final approval, Republicans are preparing to use the swelling deficits made worse by the package as a rationale to pursue their long-held vision: undoing the entitlements of the New Deal and Great Society, leaving government leaner and the safety net skimpier for millions of Americans."

You might recall that during the campaign Donald Trump told the American people time and time again that he would not cut Social Security, Medicare or Medicaid. Well, like so much else, it is clear he was lying.

Make no mistake about it. The political momentum is with us. A few weeks ago, on Election Day, Nov. 7, 2017, Donald Trump's name may not have been on the ballot, but Trumpism was. And it suffered a massive defeat. From coast to coast, in small towns and large cities, working people and young people, many of them first time candidates, ran for office -- and won. Voter turnouts in many parts of the country were surprisingly high.

People are fighting back to reclaim their democracy. They are fighting for a government and economy that works for all of us, not just the 1 percent. And now we have got to continue that pressure. Our job in the next few weeks is to make our voices heard louder than ever. Yes. If we do that, we can stop this morally bankrupt bill.

Please sign my petition calling on the United States Congress to vote NO on the Republican tax reform legislation that gives obscene amounts of money to people and corporations who have so much, while cutting services and programs for working families.

Related Topic(s): Billionaires; Corporations; Democracy; Education; Medicaid; Medicare; Organize; Republican, Add Tags
Add to My Group(s)
Go To Commenting
The views expressed herein are the sole responsibility of the author and do not necessarily reflect those of this website or its editors.