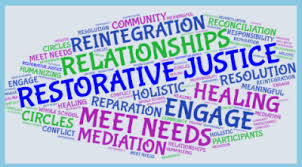 Today's readings for the 31st Sunday in Ordinary Time bring up questions of restorative justice and reparations for the harm we may have caused others as individuals and as Americans.

The day's main focus is the familiar story of the tax collector Zacchaeus. This very wealthy man was inspired by Jesus to give half of his possessions to the poor and to restore to those he had defrauded four times as much as he had embezzled.

Zacchaeus' example makes me think of Marianne Williamson's campaign for president which has made reparations a central plank in her platform.

Of course, Marianne's reparations focus is the African American community. But her rationale for it suggests something far beyond race relations within the United States. It intimates as well reparations to victims of U.S. foreign policy and to Mother Nature herself.

Let me explain and then show how the explanation is related to this day's readings.

To begin with, yes, I'm still supporting Marianne Williamson for president. She is the only candidate who confronts us with the undeniable truth that Americans need a fundamental change in consciousness if we are to address the unprecedented problems currently facing humankind.

That's what Marianne means by "miracles" changes in fundamental perceptions. That was also central to Jesus' proclamation about the Kingdom of God. We must think differently about the world and act accordingly.

So, it's not a question of merely tweaking the reigning economic system or of reviving Roosevelt's New Deal. What we need is an entirely new world vision that operates from the premise that everything we see is completely upside down. Reality stands 180 degrees away from what our culture tells us. All of it. If our culture says "black," we should think "white." If it says "good," we should think "bad." If it says "peace," we should know they're getting us ready for another war.

Instead, we are all one: women, men, children, immigrants, refugees, animals, plants, and the very air we breathe. That's the basis of Marianne Williamson's candidacy. There are no foreigners, no sacrosanct borders no America First. In fact, the United States must take 100% responsibility for the world's ills.

My decision to continue supporting Marianne Williamson was reinforced by listening to a campaign speech she gave at Yale University last week.

There she made the following points that she has always centralized in her approach to politics and to simply living as an evolved human being in our troubled world. Notice how they echo today's Gospel themes, reparations and restorative justice:

Now, those are truly radical positions (in the etymological sense of that term). No other candidate not even Bernie or Elizabeth Warren addresses them at the level of consciousness emphasized by Marianne Williamson.

So, think about that and Marianne's position on reparations and restorative justice as you read the selections included in this Sunday's liturgy of the word. You'll find them here. They all invite us to radically transformed ideas of God, ourselves and of those we live with particularly on the other side of the street, on the other side of the tracks and on the other side of the world. (Note that the first reading is from the Book of Wisdom which imagines God's Spirit as female.) What follows are my reading's "translations." Please check for yourself to see if I've got them right:

Related Topic(s): Change; Consciousness; God; Jesus; Marianne Williamson; President; Reparation; Restorative; Slavery; Spiritual; (more...) Sunday; Truth, Add Tags  (less...)
Add to My Group(s)
Go To Commenting
The views expressed herein are the sole responsibility of the author and do not necessarily reflect those of this website or its editors.