Italian engineers and Chinese traders are looking to transform Venice into a key hub with an offshore-onshore port system, known as Voops, to rival northern European ports such as Rotterdam 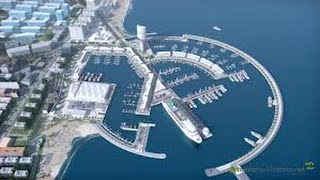 Italian engineers plan an offshore facility to take cargo from large ships from China for relay to an onshore facility and transported to destinations around Europe.
(Image by YouTube, Channel: abduljamil1)   Details   DMCA

The Chinese economy is bound to surpass the 19-nation eurozone before the end of the year. You don't need to be an analyst in China to know that. Common knowledge from Guangdong to Gansu is that China's economy was bigger than Europe's up to the mid-19th century. Then came a bad spell -- unleashed by Brit gunboat diplomacy -- for a short 150 years.

Related Topic(s): Ancient Silk Road; European Union; Italian; Marco Polo; Ports; Trade, Add Tags
Add to My Group(s)
Go To Commenting
The views expressed herein are the sole responsibility of the author and do not necessarily reflect those of this website or its editors.