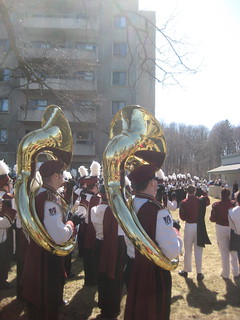 The Millard Public Schools in Omaha, Neb., will not allow its students to substitute marching band for its requirement that students take three semesters of physical education.

There are two issues here.

First, as almost everyone who ever was a member of a marching band knows, it's physically challenging. Every member must not only march, sometimes at a rapid pace, but also read music, do maneuvers and play an instrument at the same time.

Some parades are a mile; the Rose Parade is 5.5 miles. Students train not just to march, but to march the entire distance.

For majorettes, it means marching, throwing and catching batons, a feat not many can do if they are not physically fit.

But, the second issue is physical fitness.

Many school districts, dating back many decades, required physical education every semester. Exceptions were made for athletes.

The reason for PE dates to the ancient Romans--Mens sana in sano corpora-- a sound mind in a sound body. Until the past few years, junior high and high school students took PE classes every day for all semesters. For many, it meant frustration at not being able to climb ropes and accepting being hit and possibly injured by participating in dodge ball; it could also mean embarrassment and towel snaps in the locker room if the teachers weren't paying attention.

However, for a nation fixated upon iPads, smart phones, and video games, requiring PE makes sense. The classes also helped acquaint students with recreational sports--bowling, volleyball, swimming, and other activities they could enjoy long after high school.

Related Topic(s): Athletes; Music; Music; Music Group U2; Musical Instruments; School Children; Students, Add Tags
Add to My Group(s)
Go To Commenting
The views expressed herein are the sole responsibility of the author and do not necessarily reflect those of this website or its editors.