Click Here to Remove All Ads
Republished from China Rising 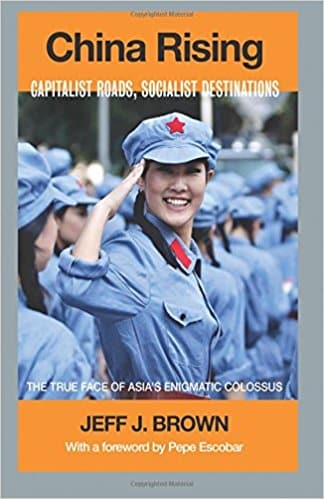 On September 9, 1976, Mao Zedong, humanity's most effective national leader ever, and 20th century's most influential, died. Nineteen-seventy-six had been a tough year already for the Chinese people. Premier Zhou Enlai and Marshal Zhu De, both revered by the masses, had passed away and just weeks before Mao died, China experienced one of the worst earthquakes in recorded history, in Tangshan, between Beijing and Tianjin. In spite of this quadruple blow to the national consciousness, the Chinese nation bounced back to where it is today. Mao's vision and teachings continue to guide and inspire his people into the future.

The vast majority of humanity outside China is so brainwashed by the West's Big Lie Propaganda Machine (BLPM), that they cannot even begin to imagine what a towering, visionary and wildly successful national leader Mao Zedong truly was. My encomium for the man is,

Mao Zedong. Never in the history of the human race has one person done so much incredible good for so many people in such a short period of time.

I did a huge amount of research into Mao Zedong, when writing The China Trilogy (see below). In my first book, 44 Days, I was still clinging to all the anti-communist-socialist BLPM projectile vomit that has covered Planet Earth knee deep: "Mao was a blood drinking monster who lustily massacred tens of millions of his fellow citizens, while cleaning his mossy-covered vampire fangs with his saurian claws". Thanks to the uber-efficacious BLPM, that is unfortunately the image that the vast majority of the human race has about Mao Zedong. Very sad, indeed, because he has much to teach every global citizens.

I regretted those first-book errors, set the record straight in Book #2, China Rising and with even more research, in Book #3, China Is Communist Dammit, explained who Mao really was as a person and a leader of one-fourth of the human race, from the 1930s to 1976. Mao was not a killer, he was first and foremost a teacher and a charismatic, inspiring visionary, who worked to create a more just, more democratic, more equitable society for the Chinese people - and he succeeded beyond anyone's wildest imaginings.

Without Mao Zedong, China today would be a continental-sized, raped and plundered hellhole, balkanized into ten different, internecine, war ravaged, drug soaked, Mafia sodomized, Western controlled puppet states. Think Afghanistan, Libya, Syria, Iraq, Yemen, Sudan, Somalia and every other of the hundreds of countries and peoples Eurangloland has debauched, destroyed, exterminated and exploited for the last 500 years. The Chinese call the 110 years when the West and then Japan did exactly that to their country, 1839-1949, as the century of humiliation.

Thanks to Mao, since then, the Chinese call their country New China and all but the most extreme Mao haters know that without him, they would not be where they are today, leading the world into the 22nd century, by the communist-socialist example of people powered democracy and socioeconomic justice. It's not even close. Case closed. Deng Xiaoping's dramatically successful reforms and opening up after Mao's death would have been impossible without the latter's industrial-scientific-infrastructural-agricultural development and bottom-up, mass line democratic foundations for the country and his people.

Even 95% of Mao haters in China acknowledge and accept his anti-imperial, anti-colonial world vision. They don't want to be Asia's next Libya either and thanks to Mao, they are free, independent and not occupied by foreign armies, something none of Eurangloland's supposed "allies" can claim. The world would be a very frightening, miserable place without New China counterbalancing the West's soul- and planet-destroying Six E's of Racism: Expansionism, Extermination, Expropriation, Extraction, Enslavement and Evangelism.

Because of Mao's once-in-human-history achievements, giving the Chinese people the vision, means and moral authority to prosper, progress and stand up to Western imperialism, Eurangloland has spent billions of dollars, euros and continues to do so in Asia, Africa, Latin America and Oceania, to destroy Mao's Dream - adopted by current President Xi Jinping as the Chinese Dream - first for country's people and then as an alternative model of win-win cooperation and multipolar governance for all of humanity.

The West's capitalist elites are scared to death you may start demanding Mao's Dream, the Chinese Dream of a better world and shared vision for all peoples, starting with the oppressed global 99%. That is why they work eight days a week, 25 hours a day to keep you brainwashed and Pavlovian fearful of all the communist-socialist success stories for the last 100 years, and continue to try to destroy their superior ways of life.

As the Chinese are fond of saying,

If not in body, then in spirit. Mao's visionary struggle for socioeconomic justice and people's democracy continues across the globe.

Related Topic(s): China; World Leaders, Add Tags
Add to My Group(s)
Go To Commenting
The views expressed herein are the sole responsibility of the author and do not necessarily reflect those of this website or its editors.