Manish gives hope for those in need of healthcare 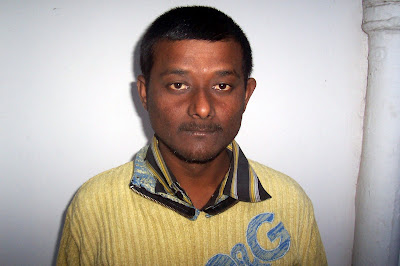 (Image by Unknown Owner)   Details   DMCA
been a washerman in his birth place, Ballia district of eastern Uttar Pradesh.

Hailing from the 'dhobi' caste, which is one of the Scheduled Castes, Manish, as a student of Standard IX in Ballia was not very comfortable going to the homes of his classmates to collect clothes for washing or for delivering them after they were washed.

The equality he felt in the class with his classmates seemed to no longer stand when he went to their homes as the son of a washerman and washerwoman. He was treated as an inferior. He did not like it. He became acutely aware of the gap between the rich and the poor. He used to ponder why the poor, in spite of putting in more labour than the rich, continued to remain poor while the rich rose up the ladder. He detested the ill treatment that was meted out to his father whenever he was found at some fault, like delay in delivery of clothes. He pledged that he would not continue in the family profession and would do something more honourable. But in spite of four attempts he could not clear the High School examination. There was very little chance of a salaried job because of poor academic performance. He decided to try his hands at business. He would buy electrical parts in bulk and would sell them to earn a living. Slowly he picked up repairing skills too. But he did not continue in this for long.

Inadvertently he landed in Lucknow in 2000. He joined a social organization and became part of their rural centre, Asha Ashram, 60 kms. outside Lucknow in rural Hardoi. Because of his honesty he was asked to look after the accounts of the Ashram. Among other responsibilities he also used to accompany patients for treatment to hospitals in Lucknow sometimes. In 2004 he devoted a complete week to save his colleague and resident of Lalpur village, Lakshmi Narayan who was affected by Pyogenic Meningitis. Lakshmi Narayan was in a state of unconsciousness for almost a week, first in Shifa Hospital on the outskirts of Lucknow and then brought to Medical College in Lucknow on Manish's advice, before he recovered. Even his family had given up hopes. If it was not for Manish, Lakshmi Narayan would not have been saved. It was this incident which made everybody around him realize the great hidden potential in Manish. Otherwise, he was labeled as a misfit in the social organization as he could not get along with most of the people associated with the organization. His idiosyncrasies and extremely frugal nature made it difficult for him to work with the rest of the team. But on his own he proved to be a man of worth when it came to providing medical care.

Thus Manish became a health volunteer with Asha Parivar. He stationed himself in Lucknow as the most serious cases used to come here from the nearby rural areas. He decided to concentrate on the Chatrapati Sahuji Maharaj Medical Univeristy (CSMMU), previously known as King George's Medical College (KGMC) , and started attending to poor patients. He found that a number of people in rural areas would try all sorts of traditional methods, some of which were not scientific. This used to bother him.

He felt that with a little bit of knowledge the patients could be cured better and faster. Hence he decided to play the role of a facilitator. He now helps poor patients access the benefits free of cost or at reasonable cost from the various government hospitals. He finds it quite disturbing that private pathological laboratories take more time than they should for providing reports to the patients and at an exaggerated cost. There are touts even in government hospitals who trap innocent patients, especially the poor coming from rural areas, and make them the victims of private medical care, which has become a roving business in the country.

Manish is quite pained that health care is no longer treated as a service and there are hardly 5% doctors and staff in the hospitals who are sensitive to the patients.

Among his other achievements he helped a homeless man Lachchu, who was picked by a team under the leadership of humanitarian police officer Shailaja Kant Mishra, obtain treatment at the Psychiatric Department of CSMMU and then stay at the Asha Ashram for several months. Lachchu was not in a position to describe much about himself as he was speaking a different language which people thought resembled Oriya. With the help of then DIG Satya Narayan Sabat, who hailed from Orissa, it was ascertained that Lachchu was from a village in Jharkhand. His family was traced and asked to come and take him back. Manish is happy that Lachchu was reunited with his family. In another case Manish helped a homeless starving on street admitted to CSMMU and provided him food. This man walked out of the hospital unnoticed after three days. Manish helped a rickshaw puller receive treatment as his sons were not in a position to provide him the treatment. An operation for removing stone from the liver had to be performed. Manish covered the cost of his treatment until he recovered. In a similar manner now he has helped hundreds of patients receive treatment from various hospitals in Lucknow . He also visits Balrampur hospital, Shyama Prasad Mukerjee Civil hospital and Sanjay Gandhi Post Graduate Institute of Medical Sciences whenever his work takes him there.

Manish today enjoys such a reputation among the doctors, residents and students of CSMMU that a number of them also provide financial assistance to him for treatment of underprivileged patients. Recently, a group has been formally formed within CSMMU by the name of 'Georgian's Hope,' which among other things will work with Manish to provide support for his work in a more organized fashion. Manish's work definitely inspires hope and confidence.

He cleared his High School examination in the fifth attempt from Kanpur. He intends to complete his Intermediate too. But the dream of this 27 year old rustic youth is to build a hospital of his own for the poor where honest health care will be provided at affordable cost or for free. Considering his performance at the CSMMU over the last four years this may not be described as too ambitious for him.

(Image by Unknown Owner)   Details   DMCA
The author is a Ramon Magsaysay Awardee (2002) for emergent leadership, heads the National Alliance of People's Movements (NAPM) and did his PhD from University of California, Berkeley in control theory which is applicable in missile technology. He taught at Indian Institute of Technology (IIT) Kanpur before devoting his life to strengthening people's movements in early 1990s. He can be contacted at: ashaashram@yahoo.com, www.ashaparivar.org)

Bobby Ramakant is a development journalist and has been writing on development issues since 1991. Health is one of the key focus areas he writes on. He is also a World Health Organization (WHO)'s WNTD awardee for 2008
Related Topic(s): Equality; Health; Health; Healthcare; Healthcare; Healthcare Reform; Hope Hopefulness, Add Tags
Add to My Group(s)
Go To Commenting
The views expressed herein are the sole responsibility of the author and do not necessarily reflect those of this website or its editors.