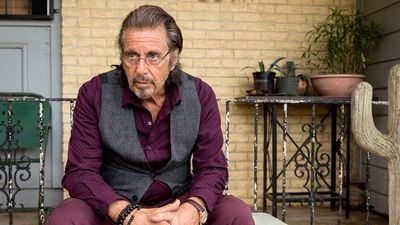 The 2014 Al Pacino movie "Manglehorn" is a psychological drama that also seems to me an artful meditation on the theme of inauthenticity in American life. With much tantalizing symbolic interlacing, it suggests that the title character, Manglehorn, played by Pacino, lives a life of illusion because he finds that a life lived in reality is too difficult to shape to the form he desires.

The principal symbol for this theme is Manglehorn's apparent lost love, Clara. He invokes her image continually, extolling her capacity when they were together to give meaning to his life by making him feel as if he was capable of overcoming any problems and attaining the fruits of any ambitions. (Clara is perhaps a symbol of the anima, in Jungian psychoanalysis the female spirit of support and nurturing in a man's psyche that balances the male tendency to abstraction and the pursuit of personal power.) Yet, by a heap of returned unopened letters to Clara in Manglehorn's bedroom dresser, we learn that she is now no longer interested in him--very likely because she sees his abject reliance on her as a sign of his own lack of purpose. That deficiency points up the absence in Manglehorn of the special male capacity to plan and build a life in accordance with a goal that Clara, in her turn, may well find important to a meaningful relationship with a man.

Manglehorn is a locksmith and key maker, a creator of tools used to gain access to homes, shops, and cars that represent bedrocks of reality in contemporary American society. Yet, he himself lacks the psychological tools needed to gain access to the understanding of circumstance and need that shape reality for himself and other people. The movie shows reasons for this. We learn that, years before, Manglehorn had lost his Catholic faith in God on hearing that a boat holding a load of schoolchildren had overturned and sunk while the nun in charge of them, screaming for her own rescue, did nothing to help and all of the children drowned. In a subsequent flashback, we learn that Manglehorn was also disaffected from reality by the carnage he witnessed in helping as a locksmith to extricate dead and broken victims from vehicles involved in a multi-car highway crash.

There is in fact only one being in his life for which Manglehorn displays concern: his pet cat Fannie, whom he dotes upon and carries around on outdoor walks. Yet, when Fannie for some reason begins eating very little of her food, Manglehorn is slow to react to the reality of her need for the attentions of a vet. Instead, he simply expresses sympathy for her, and gives updates on her condition to a female bank teller named Dawn with whom he chats in weekly visits to the bank. When Manglehorn does finally get the cat to a vet, he pays scant attention to the details the vet imparts to him about the animal's eating problem as revealed in x-ray images. It turns out that, perhaps through Manglehorn's characteristic carelessness, Fannie has swallowed a new key that had fallen to the shop floor from the grinding machine on which Manglehorn had manufactured it. With that established, and with Manglehorn's go-ahead, the vet operates on the cat to remove the key from its intestinal tract. The surgery turns out to be successful, but, in a surprising twist, we do not learn this from an expected scene in which Manglehorn carries out of the clinic a bandaged cat that displays by its lively behavior alone a restoration to good health. Instead, the surgery scene itself is shown in tedious detail and the positive results declared by the successful surgeon directly from the operating table.

To me, the entire misadventure with the cat goes to the core of the theme the movie develops. When the cat swallows the key Manglehorn has manufactured, he symbolically gains access to the reality reflected by the needs of another living being. When the operation to remove the key is shown in graphic detail, it reveals the complexity and hard work involved in effectively dealing with this reality. The same process obtains in the efforts of human beings to create a meaningful life: that too requires the setting of goals and the hard work of meeting the needs involved in achieving them. Such a purpose can never be realized simply by the help of a friendly providence, or, as Manglehorn fantasizes, by the cant encouragement of an archetypal figment he associates with his lost love Clara.

Another important connection Manglehorn has in the movie is to his son, Jacob. The two are very different personalities, however. Jacob is an ambitious careerist who has worked his way through college and steadily climbed the ladder as an investment broker. Manglehorn, by contrast, has apparently always followed the line of least resistance in squeezing out a living, while looking to Clara's encouragement and support to help him find the energy to smooth out the rough spots. At one point in the film, Jacob himself encounters a major setback in his career, finding himself short-funded in preparing to make a critical payment. Since the amount owed is not great (though never explicitly quantified), he approaches his father in hopes of receiving a small loan. Manglehorn tells his son that, because of the high cost of his cat's surgery, he has no money to spare. He also tells him that he feels no sympathy for his plight, since the life plan he has pursued--to simply make as much money as possible and accumulate the most toys, including, by implication, a gorgeous trophy wife--was bound to fail because it was rotten at the core. Jacob retaliates, ironically in the context, by reproaching his father for his lifelong inability or unwillingness to commend him for his efforts to succeed in life or to give him encouragement when the going got rough.

The pivotal connection Manglehorn develops in the movie is his dalliance with the attractive bank teller, archetypally named "Dawn." The relationship progresses beyond brief weekly chats at the bank, largely about Fannie the cat, to dates for pancake breakfasts and dinners at a local restaurant. Dawn develops a genuine crush on Manglehorn and, at one dinner out, asks him winningly, "How would you like to take a bath with me?" Manglehorn's response, however, could not be more gauche in the circumstance. Not only does he fail to deal even indirectly with Dawn's risky venture of the heart; he spends the next five minutes delivering a paean to the goodness and greatness of Clara (also an archetypal name), after which he chatters on about the meaninglessness of his life since losing her. Naturally, because Dawn has for some time hoped to persuade Manglehorn by concrete actions that she herself could offer him a basis for the meaning in life he seemed to be missing, his effusive tribute to Clara, who must have seemed to Dawn little more than a ghost, cuts her to the quick. Deeply hurt, and now thinking her advances hopeless, she tells Manglehorn that she can no longer take part in the relationship the two of them have shared, warm and respectful as it has seemed to her in their moments together.

A final important connection in the fabric of Manglehorn's life is with a young man, Gary, whom he had come to know years before as a high school baseball coach. Manglehorn had succeeded in turning Gary from a klutz into a decent ballplayer. By this and similar achievements with other players, he had transformed the historically mediocre high school ball club into a championship team and gained a reputation as a master coach and hero. Gary had never forgotten Manglehorn's magic, and, in the small town in which they both continued to live, had kept in touch with his old coach throughout the succeeding years.

Over the years, Gary had lived a checkered life inside and outside the law, but of late he had becomes owner/manager of an upscale massage and tanning salon. Near the end of the movie, he hears that Manglehorn is complaining of a sore neck and invites him to his salon for a free massage. The scene that follows is the crisis and turning point of the entire film narrative. Because Gary worships Manglehorn and believes, like Manglehorn's son Jacob, that the pursuit of power and the gratification it can bring are what American life is all about, he is certain that his hero couldn't be more pleased than to have the prosaic neck massage he has requested ramped up into a full-body erotic massage. Gary is quickly disabused of this notion, however, when, on his directive, the masseuse offers Manglehorn the salon's top-of-the-line package of thrills. Manglehorn is outraged, storms out of the building, and, after Gary chases him, apologizing, into the parking lot, engages him in a violent fistfight in which Gary receives much the worst of the damage.

Manglehorn, on the other hand, seems by the same turn of events to undergo a spiritual transformation. He perceives in Gary's misapprehension of the decent person he believes himself to be that he must be living a life untied to a recognizable identity. If that is true, he concludes, he can no longer simply limp around in an emotional fog, but must in fact reach out to a meaningful engagement with the real world. He returns to the bank, where he announces to Dawn the teller that he is a changed man and, for the first time, flirts with her in a way that strongly insinuates he would now readily take her up on her offer to take a bath with him. With that commitment, Manglehorn seems finally prepared to face the difficult reality of trying to meet his own and others' needs. The film ends artfully with the pair's mutual agreement to meet more regularly at the bank and other places to chat and to slowly try to build a more intimate and enduring relationship.

In retirement, Bob Anschuetz has applied his long career experience as an industrial writer and copy editor to helping authors meet publishing standards for both online articles and full-length books. In work as a volunteer editor for OpEdNews, (more...)

Related Topic(s): Faith; Lifestyle; Power; Purpose; World, Add Tags
Add to My Group(s)
Go To Commenting
The views expressed herein are the sole responsibility of the author and do not necessarily reflect those of this website or its editors.

Why Obama Is Necessarily Disappointing Us, and What We Can Do about It.

THE CHALLENGE OF THE CONSERVATIVE MINDSET

We Need a Progressive Primary Challenge to Obama in 2012!

A VIEW FROM THE PROGRESSIVE SIDE: Ayn Rand's Despised "Altruism" Is Essential to Building a NATION of "Producers."

It's Time for a New U.S. Foreign Policy Committed to Diplomacy and Peace

Progressives Need To Stand for Something Positive and New: the Broad Common Interest, Not Narrow Special Interests.