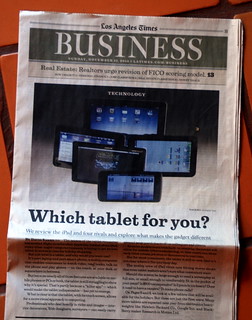 Los Angeles Times Review of Tablet Computers & the iPad - Page 1
(Image by JoeInSouthernCA)   Details   DMCA
>
In 2001, when the Raiders played the Patriots on a snowy AFC Championship game day, it was a turning point for the National Football League. It became known as the "Tuck Rule" game.
The Tuck Rule allowed quarterbacks, during a pass play, to tuck the ball down, then reset the arm to make a pass. If the ball hit the ground while tucking the ball, the ball would no longer be in play and would be called an incomplete pass rather than a fumble.
In the 4th quarter of the AFC Championship game, the Raiders had the lead, but the Patriots had the ball. With only a few minutes left on the clock, Tom Brady (The Pats' quarterback) went back to make a pass and was sacked by the Raiders' defensive back, Charles Woodson. The ball was fumbled and recovered by the Raiders. The Raiders thought they had recovered the ball, thus assuring them a victory.
The referees reviewed the play using instant-replay technology and ruled the ball an incomplete pass under the Tuck Rule. The Patriots kept the ball and ended up making a go-ahead touchdown and winning the game.
While the Tuck Rule is no longer a rule in the NFL, the Tuck Rule Game raised the profile of the instant replay. Over the years, better athletes, better play-calling design and technologies dramatically increased the speed of the game. The adoption of instant replay by the NFL was an important tool against the human imperceptibility of the referees to judge games versus the use of hard, and real-time evidence critical in accurately judging the game.
In this and many respects, the NFL reflects broader society. Our daily lives are impacted by technology and constantly changing social conditions; whether it is the Digital Revolution, job-eating robots, an expanding global economy; these are presenting new challenges to overcome in everyday life.
The NFL represents a game, but it is also an industry and must rely on the most modern tools to gather evidence in the form of objective data essential for making critical everyday decisions in the marketplace.
In contrast, the vast majority of the working class often relies too heavily on intuition, rather than evidence, to make decisions. Human intuition has its value, but intuition can lead to bias. Intuition bias may lead us to make predictions without complete information, enabling us to navigate the world. However, relying on intuition to make decisions robs us of gaining and having a deep understanding of our world in constant change.
The NFL is a league of billionaire owners that can pay a professional staff to generate reports on the professional sports industry and surrounding, worldwide, economic conditions. These reports help the owners make the critical decisions they need to sustain the league and teams. However, for the average working person, it is a much different story.
The working class is burdened with raising families, commuting and spends on average of over 40 hours per week on/at work. They often do not possess the income to pay a staff to gather information, nor the time to read lengthy reports. This limits the opportunity and ability of the average working person to make everyday life decisions based on accurate information. The working class too often must rely on their intuition to make life decisions.
For much of modern U.S. history, the media has been a free and democratizing force in the dissemination of critical information for the worker class. However, today's media content is largely steered by commercial interests and entertainment, not necessarily meant to educate the working class about survival in a modern capitalist society. Where can people look to get the information they need to meet the challenges of everyday life? In my view, the business press is a useful, daily news source.
In our modern capitalist economy, business is the heartbeat of society. The business press offers the working class cost-accessible (free from the library), reliable and succinct information that rivals much of the professional reports that CEOs and industry leaders have at their disposal to make critical financial/life decisions associated with jobs, education and the conditions of everyday life. A few noteworthy examples of the business press are the Wall Street Journal as well as the business sections of major newspapers.
While no newspaper is one hundred percent accurate, one hundred percent of the time, billions of dollars of investments rely on the information in the business press, so the business press has an incentive to write about events in an evidence-driven and accurate manner or risk losing their readership.
The working person should be reading the business press daily to guide their everyday decision making. Within its pages, data and information are provided as a useful tool to guide one's daily life and long-term (financial) planning. While reading the business paper is not a panacea for paying the bills, fixing one's car, mending relationships or other everyday challenges, it does provide a clearer picture that will help enable each of us to manage our daily working/financial life and plan to meet the challenges ahead.

Related Topic(s): Business Categories; Business Cycle; Business Major; Business School; Education; Readers, Add Tags
Add to My Group(s)
Go To Commenting
The views expressed herein are the sole responsibility of the author and do not necessarily reflect those of this website or its editors.