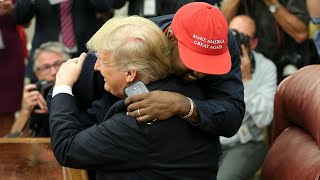 "You Made a Superman Cape for Me"

Who needs dystopian political fiction in the age of the orange-tinted monstrosity that calls itself Donald Trump [1]? Two Thursdays ago, as news came in of fatalities and massive destruction caused by a record-setting hurricane that slammed into the Florida Panhandle and Georgia the previous night, cable news buzzed with the story of a strange soap opera that had just unfolded in the Oval Office. In a bizarre reality television episode from the White House, the mentally disturbed Kardashian family member/victim Kanye West gave Trump a model "iPlane," because, he said, "this is what our president should be flying in."

West delivered a strange 10-minute soliloquy touching upon his own bipolar disorder, the 13th Amendment, Adidas, Chicago, and Trump as a national father figure who embodied the "male energy" West had missed in his childhood. While dozens of media personnel arrayed around the president's desk snapped pictures, filmed, and took notes, the self-hating Black man West explained his decision to don the swag of a great white racist by wearing a Trumpian "Make America Great Again" ballcap:

Paul Street (www.paulstreet.org and paulstreet99@yahoo.com) is the author of Empire and Inequality: America and the World Since 9/11 (2004), Racial Oppression in the Global Metropolis (2007), Barack Obama and the Future of American Politics (more...)
Related Topic(s): Fascism; Media; Trump Apologists; Trump Bully In Chief; Trump Crime; Trump Racist; Trump Support, Add Tags
Add to My Group(s)
Go To Commenting
The views expressed herein are the sole responsibility of the author and do not necessarily reflect those of this website or its editors.