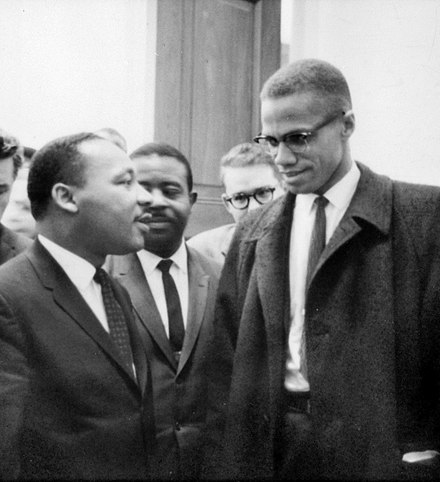 This week marks the 56th anniversary of the assassination of a great man gifted with a great mind. In my office, I have several photographs of Malcolm X. He and another man that I have tremendous admiration for, Muhammad Ali, were very good friends and I have several Black and White photographs of the two together in various settings. These are among my favorites; however, the one photograph that I treasure most is a photograph of his meeting with Martin Luther King, Jr. The two would formally meet only once, and both would be assassinated within 36 months of each other. The first, Malcolm X, assassinated within one year of their historic meeting.

Few people realize that the two were both starting to become more and more like each other in terms of philosophy. I can only imagine my lot as a Black Man in the United States if these two would have merged and survived. Their respective tactical differences notwithstanding, both of these great leaders died most violently. The inevitable convergence of the two would have had such seismic socio-economic and political effects that it would have changed not only the United States, but the world at large. This was a portent that posed an existential threat to white supremacy and national dominance.

That is why the United States government had them killed.

There have been no Black Men and/or Women in the United States, since the two were assassinated, that have received national attention for addressing the unique issues that face this demographic. Just as is the case with Black People in the United States repeatedly being killed and abused by police, the murders of Malcolm X and Dr. King were a message.

Black History Month is coming to a close, so to speak. Its appetizer is the MLK Holiday. For the month of February there are countless references to him and "I Have a Dream" but few, if any, glowing references to Malcolm X. The unspoken theorem of European-Americans and their resultant society is that Malcolm X stood for violence whereas Martin Luther King, Jr. represented non-violence, but this is not true and I will revisit the psychotic nature of this premise momentarily.

Malcolm X was in attendance at the "I Have a Dream" speech and stated "Black masses in America were, and still are, having a nightmare". The fact that the very same conditions that both of these men violently lost their lives for still exist is an indictment that stands on its own almost three-quarters of a century later. Earlier that month, Malcolm X had left the Nation of Islam. In a lengthy statement announcing his separation from the organization, Malcolm X signaled a willingness to join forces with other civil rights leaders. He said that he wanted to cooperate in local civil rights actions and that his affiliation with the Nation of Islam had been a hindrance from doing so. This statement along with a speech that he would give a week after meeting with Dr. King called The Ballot or the Bullet" became his death warrant.

The most frightful word to the European-American socio-economic status quo, pertinent to Black People in the United States, is unity. Oddly enough, it is also a word that is disconcerting to Black people themselves, though most would collectively vehemently take umbrage to this fact resultant of a slave mentality that is no fault of our own; and one that we are still shackled by in many cases. One cannot know what one does not know. And, as a group, Black People in the United States do not know the full extent of what has been done to them though practically everyone else does. There can, and will, be no "freedom" for us until we know. Perhaps there was reason that it was a crime to teach us to read or write once forced upon these shores, perhaps there was a reason that our names, language and religion was verboten; and perhaps there is a reason why schools in Black "communities" are the worst in the nation. While everyone else says "never forget", the Black Person in the United States is not only encouraged but mandated to never remember and receives institutional/systemic coercion in doing so.

It is en vogue these days, especially on the political right, to use a term called "cancel culture". This is a dubious reference to what that ilk interprets as a dismantling of the history, icons and people that they are so proud of. It is not for me to determine what European-Americans are proud of because it is, frankly, too dizzying a process for me though I will acquiesce to the pointless mental gymnastics of trying to do so in the past. It is for them to reconcile who and what they are proud of and why they are proud of it. European-Americans do not seek my counsel in this regard and it is only converse that I do not seek theirs in this same regard. However, cancel culture is nothing new in the United States and no one knows this better than those that look like me.

Malcolm X never advocated the initiating of violence, and often defused situations when a crowd could potentially become tempestuous. Malcolm X never stated that he hated anyone. What he did state was "When a person places the proper value on freedom, there is nothing under the sun that he will not do to acquire that freedom. Whenever you hear a man saying he wants freedom, but in the next breath he is going to tell you what he won't do to get it, or what he doesn't believe in doing in order to get it, he doesn't believe in freedom. A man who believes in freedom will do anything under the sun to acquire or preserve his freedom." Were this very same statement made by one of the European-American forefathers all would exalt it as the Zen-like essence of a 'patriot'. Books would be written, children would be both inculcated and regaled with this nobility. Essentially, Malcolm was stating the same sentiment that the great patriot Patrick Henry spoke when stating "give me liberty, or give me death". The obvious intellectual embarrassment for all is the reality that the same words can be uttered by two men and the interpretations are so grossly disparate. White supremacy is not a thing nor is it an affiliation, it is an attitude and the most dangerous part of it is that anybody can be a white supremacist no matter what they look like.

Malcolm X is not the only perpetual victim of cancel culture. There were many, many slave rebellions in the United States; obviously many undocumented. These historical facts are not taught because god forbid Black People in the United States defend themselves against injustice and decide to utilize the methods of those that use violence to impose pacification. Peace and pacification are two mutually exclusive entities. Among others canceled are Nat Turner, the Stono Rebellion, the New York City Conspiracy of 1741, Kikongo, Swahili and millions of other people, places and things that would have put the Black Person in the United States on equal ground with those around him or her had these things not been erased nor "cancelled". Ergo, I have a bit less than a scintilla of sympathy or tolerance for European-Americans that opt to cry about their statues and flags. White supremacy is not a thing nor is it an affiliation, it is an attitude.

European violence is glorified in the stories I was taught as a child about The American Revolution, The War of 1812, The Civil War, The Spanish American War and various others. Most ironically, I had combat veterans in my family. Yet, the mere thought of a maltreated Black individual daring to consider, let alone employ, the same mechanisms as does his white brethren is an affront to many European-Americans. It is nothing less than stunning to me. White supremacy is not a thing nor is it an affiliation, it is an attitude.

Related Topic(s): Awakening; Black Agenda Report; Black Churches; Black Panthers; Government; History Activism; History Revolution; Liberty; Malcolm X; Malcolm-X, Add Tags
Add to My Group(s)
Go To Commenting
The views expressed herein are the sole responsibility of the author and do not necessarily reflect those of this website or its editors.