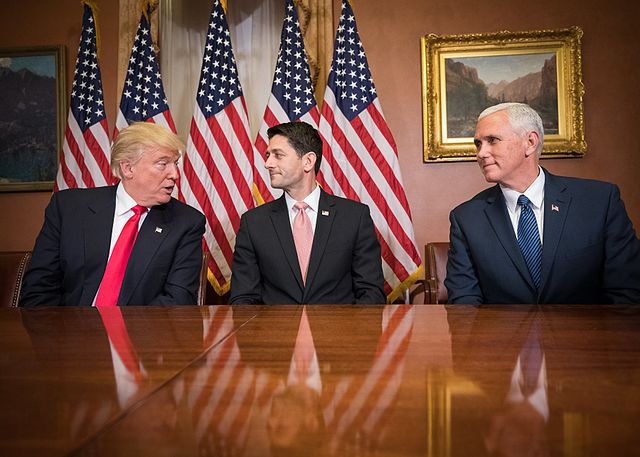 Now that the GOP controls the White House and both branches of Congress they can carry out their plan to pick off the remaining Democratic reforms and institutions one-by-one like tin cans on a fence. Starting with the most recent, The Affordable Care Act. The Neocons in Congress tried 80+ times to repeal Obama's signature legislation; now that Trump is headed to town they can finally fulfill their dream of dismantling everything he fought to accomplish. Paul Ryan was practically spitting with glee today over his big happy-faced press event where he detailed the plan to unravel Obamacare.

Does it need reform? Sure it does. It's not working for everyone, but it was working for enough people that repealing it outright is going to create a new class of health-care impoverished. As many as 20 million Americans are now insured, some for the first time. How, exactly, is that a bad thing? Now we are to return to the dark days of disqualifying preexisting conditions, kids kicked off their parents' plans at 18, cancer patients denied experimental treatment plans, and corporations cutting coverage or eliminating it altogether for the 99%-ers who work for them.

While Pence and Ryan and their buddies slapped each other on the back with hearty congratulations for the telescreens, they failed to detail their replacement health care plan. Oh they say they have one -- and it's a doozy -- but the details are like Trump's tax returns ... they're out there somewhere, but the public will never see them.

These GOP geniuses had plenty of time while ACA was in debate to come up with their own alternative and they couldn't draft as much as a paragraph, so what's changed? Why should we believe they've suddenly had some kind of legislative epiphany and have devised a health care plan that will be better than the one they are going to trash? If it's so elegant, why not reveal it? Why not put it out there in its glory to show America what true conservative leadership can do for the people?

"Pence told reporters that he and Trump would pursue a 'two-track approach' to chip away at the ACA through executive powers and legislation. Trump is 'working on a series of executive orders that will enable that orderly transition to take place,' Pence said, and is eyeing other policies that can be reversed.

"While Pence did not identify other policy targets, Republicans from Western states urged him Wednesday to undo some of the public land protections Obama has created through the 1906 Antiquities Act. Other executive actions, including those providing new safeguards for LGBT Americans and curbing greenhouse gas emissions linked to climate change, also could come under fire.

"According to a lobbyist in touch with congressional aides on the ACA issue, the Trump transition team has been considering ways to strip down the health benefits that insurers must provide in plans that they sell to individuals and small businesses.

"This list of 'essential health benefits' was envisioned by the law but was defined in a regulation written by the Department of Health and Human Services. As a result, the incoming administration could alter it without help from Congress.

"Trump took to Twitter on Wednesday morning to urge Republicans to 'be careful in that the Dems own the failed Obamacare disaster.' In a dig at Schumer and his allies, Trump added: 'Don't let the Schumer clowns out of this web.'

"Less than half an hour after Trump's social media messages, Schumer tweeted: 'Republicans should stop clowning around with America's health care. Don't #MakeAmericaSickAgain.'

"Schumer and other Democrats echoed Obama, saying they did not feel any responsibility to craft a substitute health-care bill.

"'If you are repealing, show us what you'll replace it with. Then we'll look at what you have and see what you can do,' said Schumer, who met briefly with Pence on Wednesday.

"Pence, who was greeted by applause as he entered the House GOP meeting with Reince Priebus, Kelly Anne Conway and several other future White House aides, made it clear that Trump, starting on the first day of his presidency, intended to embark on an aggressive campaign to reverse executive actions made by Obama.

Kathy never expected a career in radio as a talk show producer. Born and raised in Atlanta, Georgia, Kathy was completing her nursing degree when in 2001 - in an emergency - she was asked to fill in as the producer of Mike's program. Within a few (more...)
Related Topic(s): American Facism; American Hypocrisy; Donald Trump; Republican, Add Tags
Add to My Group(s)
Go To Commenting
The views expressed herein are the sole responsibility of the author and do not necessarily reflect those of this website or its editors.