Under the Belt and Road Initiative, Beijing aims to connect western China to the eastern Mediterranean 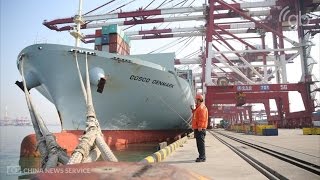 China's "Go West" strategy was brought into sharp focus at a forum in Shanghai last weekend. Billed as the Belt and Road Initiative: Towards Greater Cooperation between China and the Middle East, it highlighted key aspects of Beijing's wider plan.

Of course, Beijing's massive economic project goes way beyond merely exporting China's excess production capacity. That is part of the plan, along with building selected industrial bases in MENA countries by using technical and production expertise from the world's second-largest economy.

Again, this is will connect western China to the eastern Mediterranean. It will mean developing a corridor through projects such as the Red Med railway. There are also plans to expand ports, such as Oman's Duqm, as well as substantial investment in Turkey.

A look at the numbers tells a significant part of the story. In 2010, China-Arab trade was worth US$145 billion. By 2014, it had reached $250 billion and rising. China is now the largest exporter to assorted MENA nations, while MENA accounts for 40% of Beijing's oil imports.

The next stage surrounding energy will be the implementation of a maze of LNG, or liquefied natural gas, pipelines, power grids, power plants and even green projects, sprouting up across the new Silk Road corridors and transit routes.

According to the Asian Development Bank, the myriad of Belt and Road infrastructure projects for the next 15 years could hit a staggering $26 trillion. Other less grandiose figures come in at $8 trillion during the next two decades.

The ongoing internationalization of the yuan will be key in the process as will the role of the Asia Infrastructure Investment Bank (AIIB).

Naturally, there will be challenges. Belt and Road Initiative projects will have to create local jobs, navigate complex public and private partnerships along with intractable geopolitical wobbles.

Enseng Ho, a professor from the Asia Research Institute at the National University of Singapore, is one of an army of researchers studying how historical links will play an important role in this new configuration.

An excellent example is the city of Yiwu in Zhejiang province. This has become a mecca for merchant pilgrims from Syria or east Africa and has profited the region, according to the Zhejiang provincial government.

In a wider Middle East context, Beijing's aim is to harness, discipline and profit from what can be considered an Industrialization 2.0 process. The aim is to help oil producers, such as Saudi Arabia and the rest of the Gulf states, diversify away from crude.

There is also reconstruction projections elsewhere, with China deeply involved in the commercial renaissance of post-war Syria.

Related Topic(s): Belt And Road Initiative; China New Silk Roads; China Politics; Middle-east; Trade; Yuan, Add Tags
Add to My Group(s)
Go To Commenting
The views expressed herein are the sole responsibility of the author and do not necessarily reflect those of this website or its editors.