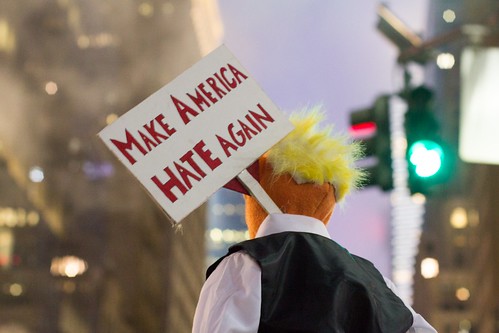 Two days late, Donald Trump has finally condemned violent white supremacists. He was pushed into it by a storm of outrage at his initial failure to do so in the wake of deadly violence to Charlottesville, Virginia.

But it's too little, too late. Trump's unwillingness to denounce hateful violence has been part of his political strategy from the start.

Weeks after he began his campaign by alleging that Mexican immigrants were criminals and rapists, two brothers in Boston beat up and urinated on a 58-year-old homeless Mexican national, subsequently telling police "Donald Trump was right, all these illegals need to be deported."

Instead of condemning the brutality, Trump excused it by saying "people who are following me are very passionate. They love this country and they want this country to be great again."

During campaign rallies Trump repeatedly excused brutality toward protesters. "You know what they used to do to guys like that when they were in a place like this? They'd be carried out on a stretcher, folks."

After white supporters punched and attempted to choke a Black Lives Matter protester, Trump said "maybe he should have been roughed up."

Trump was even reluctant to distance himself from David Duke and the Ku Klux Klan.

Since becoming president, Trump's instigations have continued. As Representative Mark Sanford, a Republican from South Carolina, told the Washington Post, "the president has unearthed some demons."

In May, Trump congratulated body-slamming businessman Greg Gianforte on his special election win in Montana, making no mention of the victor's attack on a reporter the night before.

Weeks ago Trump even tweeted a video clip of himself in a WWE professional wrestling match slamming a CNN avatar to the ground and pounding him with punches and elbows to the head.

Hateful violence is hardly new to America. But never before has a president licensed it as a political strategy or considered haters part of his political base.

In his second week as president, Trump called Wayne LaPierre, CEO of the National Rifle Association to the White House.

Soon thereafter, LaPierre told gun owners they should fear "leftists" and the "national media machine" that were "an enemy utterly dedicated to destroy not just our country, but also Western civilization."

Since then the NRA has run ads with the same theme, concluding "the only way we stop this, the only way we save our country and our freedom, is to fight this violence of lies with a clenched fist of truth."

Related Topic(s): America Culture Of Violence; American Hypocrisy; Hate Groups Neo-Nazis; Hate-Discrimination; NRA, Add Tags
Add to My Group(s)
Go To Commenting
The views expressed herein are the sole responsibility of the author and do not necessarily reflect those of this website or its editors.