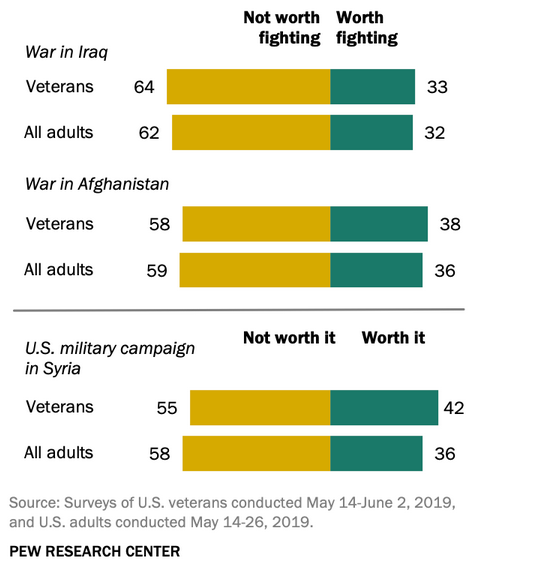 A Pew Research Center opinion poll conducted among 1,284 veterans who had served since 2001 (which also polled 1,087 American civilians as a control), found that a majority of veterans holds that the Afghanistan and Iraq Wars and the intervention against ISIl in Syria were not worth it.

The results were summarized by researchers Ruth Igielnik and Kim Parker.

64% of veterans said that the Iraq War was not worth fighting.

33% said that it was worthwhile.

These percentages are similar to those of the civilians polled.

It did not matter whether the veterans had actually served in Iraq or not, the 64% who doubted the benefit of the war remained constant.

Veterans were a little bit more bullish on the Afghanistan War, in that 58% said that it was not worth it. 38% said it was worth fighting.

Again, the civilian percentages are almost the same.

The Syria intervention was slightly more popular, but even there, 55% doubted it had been worthwhile.

In contrast, 58% of civilians had their doubts about Syria.

Those veterans most likely to say that the wars had been worthwhile were members of the Republican Party. Igielnik and Parker write:

It seems to be noteworthy that even among Republican veterans, only a plurality thinks those wars were worth fighting.

Pew didn't ask the why question, so we can only speculate about why there is this lack of confidence in these wars. I've been writing about them for 18 years, and I have some really good speculations.

Related Topic(s): Afghanistan War; Iran; Iraq Army Troops; Syria Attack; Veterans; Veterans Iraq, Add Tags
Add to My Group(s)
Go To Commenting
The views expressed herein are the sole responsibility of the author and do not necessarily reflect those of this website or its editors.