Source: The Guardian
Pew finds that, for the first time since 9/11, Americans are now more worried about civil liberties abuses than terrorism 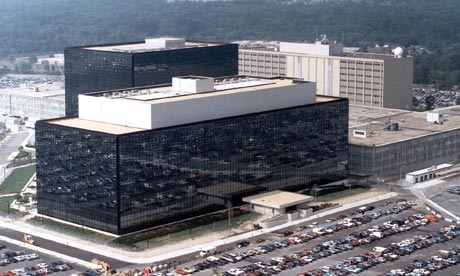 Numerous polls taken since our reporting on previously secret NSA activities first began have strongly suggested major public opinion shifts in how NSA surveillance and privacy are viewed. But a new comprehensive poll released over the weekend weekend by Pew Research provides the most compelling evidence yet of how stark the shift is.

Among other things, Pew finds that "a majority of Americans -- 56% -- say that federal courts fail to provide adequate limits on the telephone and internet data the government is collecting as part of its anti-terrorism efforts." And "an even larger percentage (70%) believes that the government uses this data for purposes other than investigating terrorism." Moreover, "63% think the government is also gathering information about the content of communications." That demonstrates a decisive rejection of the US government's three primary defenses of its secret programs: there is adequate oversight; we're not listening to the content of communication; and the spying is only used to Keep You Safe - .

But the most striking finding is this one:

"Overall, 47% say their greater concern about government anti-terrorism policies is that they have gone too far in restricting the average person's civil liberties, while 35% say they are more concerned that policies have not gone far enough to protect the country. This is the first time in Pew Research polling that more have expressed concern over civil liberties than protection from terrorism since the question was first asked in 2004."

For anyone who spent the post-9/11 years defending core liberties against assaults relentlessly perpetrated in the name of terrorism, polling data like that is nothing short of shocking. This Pew visual underscores what a radical shift has occurred from these recent NSA disclosures: 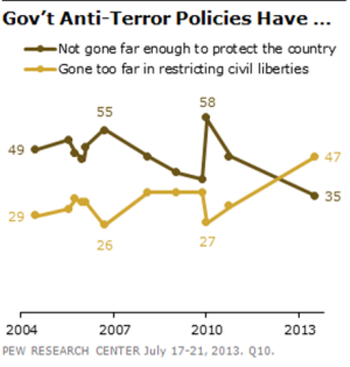 Perhaps more amazingly still, this shift has infected the US Congress. Following up on last week's momentous House vote -- in which 55% of Democrats and 45% of Republicans defied the White House and their own leadership to vote for the Amash/Conyers amendment to ban the NSA's bulk phone records collection program -- the New York Times has an article this morning which it summarizes on its front page this way:

Related Topic(s): Congress; Congressional Ethics; NSA; Privacy; Surveillance, Add Tags
Add to My Group(s)
Go To Commenting
The views expressed herein are the sole responsibility of the author and do not necessarily reflect those of this website or its editors.