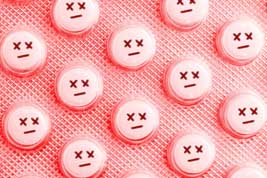 Mainstream news outlets would never broadcast, "Mr. Clean Magic Eraser wipes away grime and replaces it with shine" as if it were news. Yet, as I write this, news outlets are reporting that Pfizer's Covid vaccine for kids five to 11 is effective--according to Pfizer! This is not only a free commercial for a drug maker (that can buy its own commercials) it is leading broadcasts as if it were real news.

The same free commercial for drug makers was seen seven months ago after safety questions arose in Europe about the Oxford/AstraZeneca Covid vaccine. After sales fell, media reported the breaking news that the Oxford/AstraZeneca vaccine was safe--according to Oxford! Does anyone remember the definition of "begging the question"?

Meanwhile a bigger drug maker story, the discovery that the popular antidepressant mirtazapine (marketed as Remeron) is linked to death in those with dementia, is barely heard on the airwaves and not considered breaking news. Researchers say within 16 weeks of taking the drug there were seven deaths in the drug group versus only one in a control group. Forty-six million people suffer from dementia worldwide. How many have taken the drug which made $891.7 million in one year after its release? Why has it taken researchers 20 years to identify the death risks?

As I have continually reported, the risks of brand name drugs are often ignored until the patent runs out and all profit has been made. Examples of risks only revealed post patent were seen with the drugs Vioxx, Lipitor, Fosamax, Paxil, Ambien, Adderall, Nexium and, apparently now with mirtazapine.

Examples of drugs pulled from the market after millions of patients used them because they were found to be unsafe after aggressive marketing include Vioxx, Bextra, Baycol, Trovan, Seldane, Hismanal, Darvon, Mylotarg, Lotronex, Propulsid, Raxar, phenylpropanolamine (PPA), phenacetin and, recently, the diet drug Belviq. Drug safety skepticism is clearly justified and Pfizer is easily the poster child.

3) Suspended trials of tanezumab, an osteoarthritis pain drug, because patients got worse not better, some needing joint replacements

5) Witnessed its client researcher, Scott S Reuben, MD, who put Bextra, Celebrex and Lyrica on the map, trotted off to prison for research fraud

7) received a letter from Sen. Charles Grassley (R-Iowa) requesting its whistleblower policy and

8) had its appeal to end lawsuits by Nigerian families who accused it of illegal trials of the antibiotic Trovan in which 11 children died, rejected by the Supreme Court

Why do mainstream news outlets consider Pfizer's praise of its own drug, with no third party corroboration, news instead of an unabashed commercial? Follow the money.

During normal times, drug maker research and development is funded by taxpayers through basic NIH research as many industry watchers have pointed out. We, the public own it. Yet the "technology transfer" enabled by the 1980 Bayh-Dole Act allowed drug makers and universities to patent publicly funded drugs to line their own pockets. For example, Lyrica (pregabalin) was largely funded by taxpayers yet Northwestern University sold it to Pfizer for $700 million.

During Covid times, the profiteering of drug makers has doubled. Not only was the basic vaccine research funded by the government , the government is also grandly compensating drug makers for the cascade of vaccines they are continuing to market. We are witnessing an unprecedented, opportunistic Pharma profit party--

Used by permission from Dreamstime
(Image by Dreamstime)   Details   DMCA
paid for by us.

Meanwhile, while the nation watches Covid, drug makers continue to market hastily approved drugs, pulling them when they prove unsafe and still making a quick profit. Nor, are drug makers overly worried about having funds to compensate the injured.