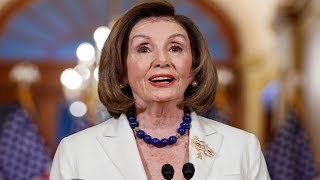 "Make no mistake, we are not impeaching this president. He is impeaching himself. If you are the president, and you obstruct justice, try to bribe a foreign leader, and threaten national security, you're going to get impeached. End of story." ~~ Susan Davis, D-Calif., Impeachment Debate, House of Representatives, Wednesday, December 18, 2019.

Given Leader McConnell's stark and clear declaration of intent to undermine the objectivity the Constitution envisions in an impeachment trial, you are compelled to safeguard the process by all means at your disposal.

Moreover, you are further empowered by the mandate of public opinion on the matter. By an overwhelming margin, the American people want precisely what you are negotiating for -- open, public testimony from administration officials with direct, firsthand knowledge of the events for which the president has been impeached. They are surely entitled to have it.

In addition, unfolding events accelerate the urgency. New evidence of the president's involvement in the Ukrainian affair now surfaces on an almost daily basis. White House emails newly obtained by Kate Brannen at Just Security illustrate a clear intent on the part of the president personally to withhold Congressionally approved aid from Ukraine as the administration demanded an investigation into former vice president Joseph R. Biden.

The New York Times report "Behind the Ukraine Aid Freeze: 84 Days of Conflict and Confusion" adds granular detail of how events unfolded to the public record. This information adds significant context and urgency to the case for impeachment. The administration officials cited in these reports were directly involved. The public has a fundamental interest in hearing from them in the Senate trial.

In totality, your demand for objectivity and transparency in the Senate impeachment trial is the least the public and history have a right to expect. I support your efforts.

Related Topic(s): Impeachment; McConnell-Mitch; Speaker Of The House Nancy Pelosi; Support Of The People, Add Tags
Add to My Group(s)
Go To Commenting
The views expressed herein are the sole responsibility of the author and do not necessarily reflect those of this website or its editors.