Musings from Ray on Mad-Dog Mattis and "Military Necessity"

When President-elect Donald Trump sent his talent scouts to the attack-dog kennel run by defense industry giant General Dynamics, in order to recruit former Marine General James "Mad Dog" Mattis to be secretary of defense, cries of apprehension were drowned out by smug one-percent reassurances. 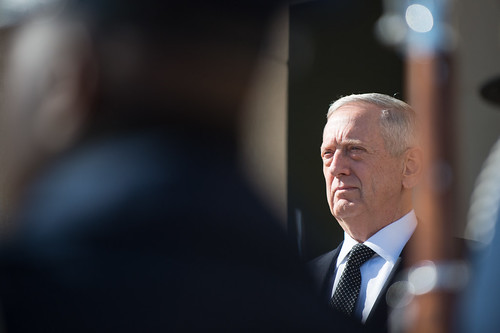 Those who "know what's best for the country" insisted: "NOT TO WORRY; actually Mattis is a Renaissance Man. Yes, he thinks, and says, it's fun to shoot people. But after taking a hot shower in the evening, he reads Greek epic poetry.

"We have already shifted from attrition tactics, where we shove them from one position to another in Iraq and Syria, to annihilation tactics where we surround them."

Mattis was asked what about civilian casualties.

"Civilian casualties are a fact of life in this sort of situation," he replied, adding that the U.S. military does "everything humanly possible consistent with military necessity."

This brings to mind the Feb. 7, 2002 Executive Order signed by President George W. Bush authorizing another kind of war crime -- torture. That Memorandum concluded with identical reassurance -- in this case, that detainees would be "treated humanely, and, to the extent appropriate and consistent with military necessity, in a manner consistent with the principles of Geneva."

Worse still (if there can be a "worse still"), Mattis reportedly is weighing how many thousands more troops from the U.S. poverty draft to send to -- hold your breath -- AFGHANISTAN!

Instead of reading Homer and reflecting on the Trojan War 33 centuries ago, Mattis ought to fast forward and read more "modern" history on Afghanistan. He might fast forward to "just" 27 centuries ago, when Alexander the Great made, but did not follow through on, an abortive attempt to conquer Afghanistan. "Abortive" is the key word here. He faced stiff resistance from the locals, who for some reason did not like being invaded and lacked the respect due the "sole superpower the world" of those times.

Alexander was smart enough to realize that he had bit off more than he could chew. He brought his army back west, before many more of them got killed, to where he knew what he was doing. On that count alone he deserves the moniker "Great." Unlike those who have tried to conquer Afghanistan in the 22 centuries that followed, he decided the game was not worth the candle.

This adage is attributed to Alexander: "There is nothing impossible to him who will try." ( οὐδὲν το-ς θαρροῦσιν ἀνάλωτον ) The corollary, of course, is that some things DO happen to be well nigh impossible -- and, as such, not worth the cost of trying for some dimly perceived, non-essential gain.

Ray McGovern works with Tell the Word, the publishing arm of the ecumenical Church of the Saviour in inner-city Washington. He was an Army infantry/intelligence officer and then a CIA analyst for 27 years, and is now on the Steering Group of Veteran Intelligence Professionals for Sanity (VIPS). His (more...)
Related Topic(s): General James Mattis, Add Tags
Add to My Group(s)
Go To Commenting
The views expressed herein are the sole responsibility of the author and do not necessarily reflect those of this website or its editors.