Click Here to Remove All Ads
First Published by 5 Pillars 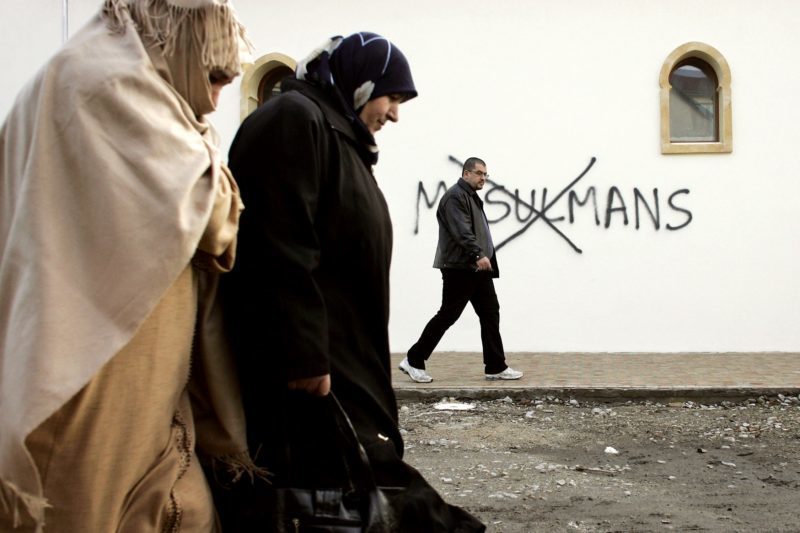 France's Muslims are French, we must remember: unlike the English-speaking world they are not prone to publicly dividing themselves from others via "identity politics". The French model of assimilationism - as opposed to multiculturalism - instantly pounces on "communitarianism", and we must admit that both models have their virtues and their flaws.

On October 27 I covered a demonstration in Paris (for Iran's PressTV) to denounce the increasing Islamophobia, and there were maybe 1,000 people there. That's a pretty small turnout considering 5-10% of the nation is Muslim.

The ambiance was typical for a pro-Muslim protest: a mixture of fear, hurt pride and true pride. Fear, because who knows if the cops or a far-right group will start attacking; hurt pride, because France instills a fear that open displays of faith - especially Islamic - are somehow wrong, and to succumb to such a false idea is naturally shame-inducing; and real pride, because one eventually realises that they are surrounded by a vibrant, loving and strong community which can never be extinguished. Pride in Islam and in our families, friends and beliefs carries the day in the end, of course.

We have had exactly two professional polls querying public support for the Yellow Vest anti-government since late April, but every day seems to produce new poll fodder for the media regarding France's feeling towards Islam: I imagine the next poll will be, "Which color hijab makes you the angriest?

The "latest wave" includes a list of racist absurdities , insults , and provocations which are too long to mention here, but there's a half-dozen links for you. I think the most telling incident is this one :

President Emmanuel Macron made a nonsense speech - aimed at keeping Islamophobia in the media cycle - where he called on Muslims to do more in the fight against "Islamic separatism". Laughable, considering France's role in arming Daesh, publicly praising Al-Nusra and the billions they make selling weapons to the reactionary Persian Gulf monarchies. Hours later a man in southwestern France, who recently stood as a candidate for the National Front, tried to set fire to a mosque and shot two Muslims.

Only a fool doesn't believe in the law of cause and effect: when the president, his ministers, and the men and women on TV spend weeks spreading lies and hate about Islam then already-hateful people will feel empowered to commit hate crimes. Nothing could be clearer from history.

Decrying the Islamophobic incidents is futile - the question to ask here is, "Why?"

The answer was succinctly given to me at the anti-Islamophobia demonstration by Yasser Louati, formerly the spokesperson for the Collective Against Islamophobia in France , which is generally regarded in France as a radical organisation merely for having the gall to provide a resource to empower those victimised by anti-Muslim racism.

His answer was simple: "It's Islamo-diversion."

The entire administration of President Emmanuel Macron is incredibly unpopular, outdoing even his previous one-term predecessors Nicolas Sarkozy and Francois Hollande. All three have forced through far-right economic measures which ultimately aim to destroy the French social model in favor of the far more unequal model exhibited by the US, UK and Germany.

But Macron has gone the furthest in his Americanisation of France's economic and workplace culture. His 2.5 years in office have been one radical reform after another, and also one violently repressed protest after another. The only public opinion poll Macron seems to pay attention to are those which involve Islam or immigration (on which he has turned to nearly the far-right).

But now he may be reaching his radical reforms limit" and thus the recent "Islamo-diversions".

Macron is in the middle of forcing through - despite widespread public opposition, yet again - the second (back-door, this time) hike to the retirement age in 9 years. Absurdly, his pension "deforms" also include a one-size-fits-all universal plan. Not even the UK or Germany is dumb enough to try this: how can someone who works physically be compared with someone who sits in an office? Are garbage men supposed to be hoisting bins from age 18 all the way to 64? You try it first and tell me how that works out for you".

Related Topic(s): Muslims, Add Tags
Add to My Group(s)
Go To Commenting
The views expressed herein are the sole responsibility of the author and do not necessarily reflect those of this website or its editors.