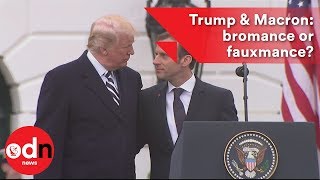 All the handshakes, hugs and smooching between Trump and Macron this week made for cringing viewing. Not because two males were being cordial and affectionate.

No, the embarrassment stems from the French leader being such a pathetic poodle to the White House bully.

The "dandruff moment" was perhaps the most revealing. At one point in the Oval Office, the American president interrupted himself mid-sentence to lean over to his French counterpart and he began grooming his collar, saying he was removing "dandruff." Macron seemed unfazed and continued smiling.

It was what Trump said next that was revealing. "We want him to be perfect" He is perfect."

The Freudian slip from the American signified that the French president is little more than a cypher, a flunkey, a perfect little poodle for Washington. Does as he's told.

During the three-day state visit, Donald Trump and Emmanuel Macron gave the appearance of best buddies, of being equals. That's certainly what the French leader was striving to achieve. To be seen as the top European ally of America, and the European politician who best understands Trump, best manages the maverick American.

In that way, Macron aims to make "France great again"; for it to be seen as a re-energized world power on an equal footing with the US. Since Macron was elected president last May, his stated goal has been to restore France as a great power.

That seemed to be working to plan this week. Macron is the first international leader to be hosted by Trump in an official state visit. The British "special relationship" with Washington has been eclipsed; and Germany's Chancellor Angela Merkel who follows Macron's visit on Friday is being only afforded a low-key, one-day working meeting in the White House.

But the optics of bonhomie and "bromance" aside, Macron's pretensions of standing alongside Trump as the "leaders of world freedom" are overblown.

The proof of that came when Macron caved-in to Trump's antagonism over the Iranian nuclear deal. Saving that deal by keeping Trump onboard was supposed to be Macron's main mission in Washington DC.

The day before Macron arrived, he gave an interview to Fox News asserting that "there was no Plan B" to the Iran nuclear accord which was signed in 2015 by the US, France, Britain, Germany, Russia and China.

Macron was billed as the European leader who would persuade Trump to stick with the nuclear agreement. But this week, despite all the glad-handing with "my friend Emmanuel," Trump maintains an aggressive disdain for the Iran deal, hinting that he is ready to scrap it next month.

And what was Macron's response? He said that France was now working with the US to "renegotiate a new deal" with Iran.

Related Topic(s): France; Trump Ego; Trump Foreign Policy; Trump Macron Bromance, Add Tags
Add to My Group(s)
Go To Commenting
The views expressed herein are the sole responsibility of the author and do not necessarily reflect those of this website or its editors.