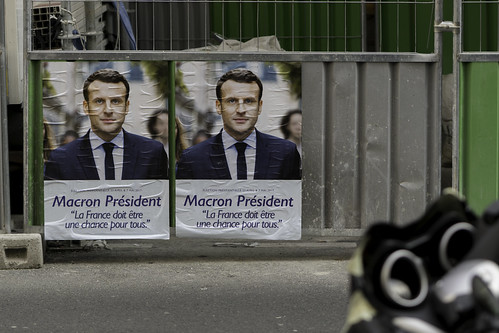 The new French president, Emmanuel Macron, who was thrust into the French presidential race as a pro-European Union counterweight to prevent the election of National Front leader Marine Le Pen, appears to have more than a casual relationship with the United States. While he worked within the Ministry of the Economy as both a special inspector and as minister, Macron oversaw the virtual theft of strategic French industries by American firms having strong links to the U.S. Intelligence Community.

The hacking of the computers of Macron's En Marche! campaign movement by unknown parties yielded some interesting material. Defenders of Macron contend that the computer files released were either fake or extraneous information. However, one set of files dealing with the virtual theft of France's top information technology giant by individuals connected to the U.S. Central Intelligence Agency is exactly the type of files one would expect the Macron campaign would keep. Macron's first job in the French government was to protect the interests of French companies from foreign competition and, most of all, acquisition.

The move by the American intelligence services to acquire French smart card technology leader Gemplus International began in 2001 and the operation was largely complete by 2004, the year Macron became an Inspector of Finances in the French Ministry of Economy. French industry has long been a target for surveillance and/or acquisition by American companies and the CIA has played an important role in such economic warfare operations. For example, the French electronics firm Thomson-CSF was long a top target for U.S. National Security Agency and CIA surveillance.

Documents concerning the successful takeover of Gemplus, along with its main factory in Gemenos, Bouches-du-Rhône, France, by an American firm called Texas Pacific Group (TPG) are included in the tranche of files lifted from the En Marche! computers. TPG first acquired Gemplus shares in February 2000. In 2006, Gemplus merged with Axalto to form Gemalto and the effective U.S. control of the firm was complete.

In September 2002, Alex Mandl, an American native of Vienna, Austria, and a former President of AT&T, chairman and CEO of Teligent, board member of the CIA's venture capital firm IN-Q-TEL, and member of the board of the neoconservative American Enterprise Institute, was named CEO of Gemplus International. He continues as the executive chairman of Gemalto.

The French corporate press, which lavished Macron with praise, a former Rothschild banker, describes the Gemplus documents as having nothing to do with Macron. The French media argues that Macron was a mere student at the elitist French civil service academy, the École nationale d'administration (ENA) until he graduated in 2004. However, as the leaked documents clearly indicate, the Gemplus takeover was still being investigated by the French government when Macron became an Inspector within the Economy Ministry in 2004. Since Macron's role was to ensure that French companies were free of foreign attempts to stymie French economic growth, his performance, as seen in the loss of French jobs to foreign interests, was abysmal.

It is very likely that En Marche's files on the Gemplus takeover were to have backup information at the ready in the event Macron's role in covering up details of the American takeover of Gemplus were to become public. Any political party must be prepared to confront revelations exposed by opposition research into their candidates. It is also noteworthy that one of En Marche's few published policy planks stated it was Macron's policy to monitor but not prevent foreign ownership of strategic French industries and businesses.

The operative question about Macron is: what did he know about the Gemplus takeover and when did he know it? En Marche's Gemplus files, contained in a folder labeled Macron and dealing with the American takeover, read like a John LeCarre' spy novel.

One file, marked Confidential , and sent to Stefan Quandt of the billionaire Quandt family of BMW and Daimler fame in Germany, deals with Gemplus's plummeting stock value in 2001 amid extremely tense relationship and clashes between the main people at the top echelons, and breakdown of communication with the personnel. As a result, the bulk of them is completely unmotivated today .

As an inspector within the Economy Ministry, it is astounding that Macron would not have been aware of the violation of French law that occurred with the American takeover of Gemplus. This is also described in another Gemplus file from his campaign, which points to the situation regarding Gemplus's post-U.S. takeover: Irresponsible statements, often followed by reversals on site closures and firing of personnel, even before consulting with their representatives (as the law and common sense requires) .

The Quandts are very publicity-shy and there is a good reason for it. Guenther Quandt manufactured Mauser firearms and anti-aircraft rockets for the Third Reich. He divorced his first wife, Magde Quandt, after they had one child, Harald Quandt. Magde then married Nazi Propaganda Minister Joseph Goebbels. Stefan Quandt, who was involved in the takeover of Gemplus, is the son of Harald Quandt's half-brother Herbert Quandt.

The negative information on Gemplus resulted in a January 24, 2002 report from Goldman Sachs that urged the company to continue with its American-directed restructuring to maintain market health. Although he was a student at the ENA at the time, there is scant information on what projects to which Macron was assigned from 2001 to 2003 by his civil service professors.

Other Gemplus-related files in the En Marche! folder include those related to one of the principals of Gemplus, Ziad Takieddine, a French-Lebanese Druze arms broker and graduate of the CIA-linked American University of Beirut. Takieddine helped engineer the American takeover with the help of Herr Quandt. Takieddine has helped conclude major French arms deals with Libya, Syria, Saudi Arabia, and Pakistan. Accused of money laundering in the British Virgin Islands by his ex-wife, Takieddine is also the uncle of Amal Alamuddin, the wife of actor George Clooney. Takieddine is also a bitter political foe of former President Nicolas Sarkozy, who lost out in the presidential race in 2017 to rival conservative François Fillon. Macron edged out Fillon in the first round of the presidential election, coming in second ahead of Fillon's third place finish.

Related Topic(s): Emmanuel Macron; France; NSA, Add Tags
Add to My Group(s)
Go To Commenting
The views expressed herein are the sole responsibility of the author and do not necessarily reflect those of this website or its editors.