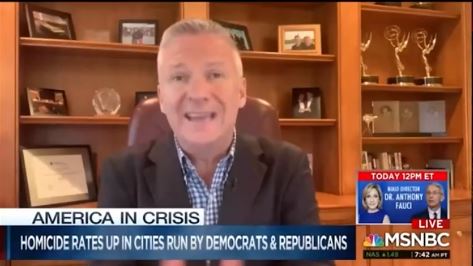 MSNBC Tom Costello did a great job in dispelling Trump's lie about Democratic cities being crime-infested compared to Republican-run cities. A segment like this is well overdue.

Donald Trump continued to lie to Americans about crime-infested cities run by Democrats. Tom Costello, in a well-done report, dispels the notion that it has anything to do with Party affiliation. Moreover, here is a pertinent piece from BBC News.

As of September 2020, the top 100 largest US cities are run by 64 Democrats, 28 Republicans, three independents and four non-partisans. Mr Trump has blamed Democrats for high rates of violent crime in cities they control. But the FBI has warned against using its statistics in a way which ranks cities and oversimplifies what causes crime.

"These rough rankings provide no insight into the numerous variables that mould crime in a particular town, city, county, state, tribal area, or region," it says on its website. "Consequently, they lead to simplistic and/or incomplete analyses that often create misleading perceptions adversely affecting communities and their residents."

Lexington in Kentucky, a city of over 300,000 people, has seen 84.6% increase in murders when compared with the same period in 2019, for example. "Murder is up about 25% nationally including nearly identical change in Democratic and Republican-run cities," says US crime analyst Jeff Asher.

Spread the truth. Law and order? Fix the virus, the economy will follow, and the crime rate will go down.

Please get my new book "It's Worth It: How to Talk To Your Right-Wing Relatives, Friends, and Neighbors" today knowing you (1) Get communication techniques & (2) Support Progressive message delivery.

Related Topic(s): Crime Rates, Add Tags
Add to My Group(s)
Go To Commenting
The views expressed herein are the sole responsibility of the author and do not necessarily reflect those of this website or its editors.