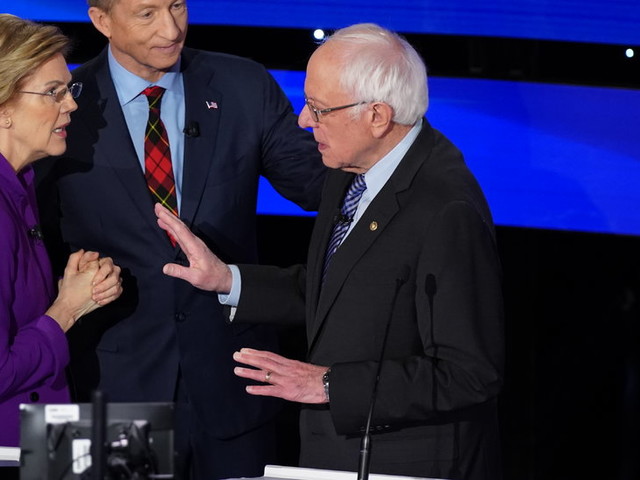 The corporate media has been waiting a year for what happened between Sens. Bernie Sanders and Elizabeth Warren at last Tuesday's Democratic debate.

In addition to all the ways commercial news outlets avoid substantive dialog about the real issues, this presidential campaign has presented them a unique opportunity to attempt to drive an ideological wedge between Warren and Sanders, the most progressive candidates in the rapidly shrinking primary field.

Although Warren may not be its obvious favorite, the media has a demonstrable antipathy toward Bernie.

The worst offender may be the "liberal" MSNBC.

In its desperate desire to portray Bernie a mendacious misogynist/Communist/utopian crackpot, it enlisted testimony from "international communications expert" and owner and president of the Body Language Institute, Janine Driver, to explain how Bernie was undoubtedly lying to Sen. Warren when he denied ever suggesting a woman is unable to be elected president.

On anchor Joy Ann Reid's AM Joy, Driver cited Sanders' "eye level" and the "turtling" of his shoulders as evidence.

"So now the slant is that he's physically intimidating too, oh and sexist. Totally cool, normal interpretation of someone being spontaneously confronted on national TV. It's getting outrageous."

"This is unhinged. Genuinely divorced from reality. I know there's a big push to move on but if the mainstream media is gonna broadcast this fraudulent garbage then I don't feel particularly compelled to drop it."

"I know there's a big push to move on but if the mainstream media is gonna broadcast this fraudulent garbage, then I don't feel particularly compelled to drop it."

"MSNBC is a f*cking disgrace. What it allows on its air - this segment of bullshit charlatan body language analysis to prove Bernie is lying mixed with Joy Reid's anti-semitic stereotypes about his pushy use of his hands when speaking - is appalling but typical. The hacker did it."