In spite of the fact that Marianne Williamson has received much less time to speak during the debates than the others she shared the stage with, she filled every moment she had with jewels of wisdom, and the headlines show that the MSM is no longer Ignoring her. In fact, several headlines call her the winner of the debate.

Politics moves fast. They're no longer ignoring us.

They're still laughing but with some nervousness in their voices; and we are now moving into some serious resistance to the emergence of our campaign - lies about my stance on medicine and science, etc. Those who support the campaign need to get serious now; one of the themes has always been that we need to become as convicted in our love as some people are convicted in their fear.

If you want the campaign to succeed, please step it up in your own way. Perhaps make a video endorsement on your own Instagram and tag me. Tell your friends to do the same. Shout it from the mountaintops on both Facebook and Twitter. Sign up at marianne2020.com to volunteer. Send whatever money feels right to you and ask others to do the same. We need money and we need buzz in order to turn on all the engines of the campaign now.

Our rocket has launched, and I'm very clear what energy launched it. So much love has gone into this candidacy and so much love has been expressed through it. There are thousands if not millions of people adding their energy to a new political possibility for the United States and for the world.

This is very, very serious. I am deeply grateful and I am deeply committed. I hope you will help further the process in every way you possibly can. Starting today, and not letting up until we're in the White House...

If a Williamson presidency seems "farfetched," think of how farfetched Trump's activities would have seemed to us just three years ago. The further he pushes the pendulum in the direction of fear and hate, the further it must swing back to love and compassion. In fact, it may be Trump's nastiness and ineptitude that pave the way for a politics with heart. 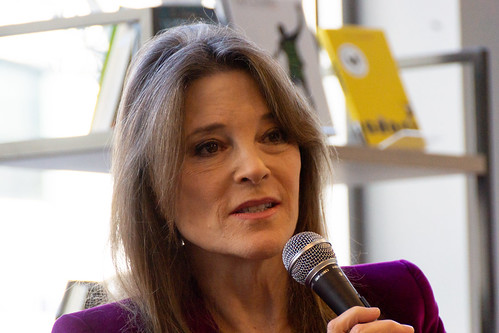 And imagine the people President Williamson would include on her team! She and Dennis Kucinich worked on the Dept. of Peace proposals for years, with several conferences, and he also spoke at Marianne's 2017 Sister Giant conference in Washington DC. Bernie Sanders was the headline speaker at that conference. A key organizer with Marianne was Derrick Harkins, Senior Vice-President at Union Theological Seminary and former advisor to President Obama.

Related Topic(s): Headlines; Marianne Williamson, Add Tags
Add to My Group(s)
Go To Commenting
The views expressed herein are the sole responsibility of the author and do not necessarily reflect those of this website or its editors.