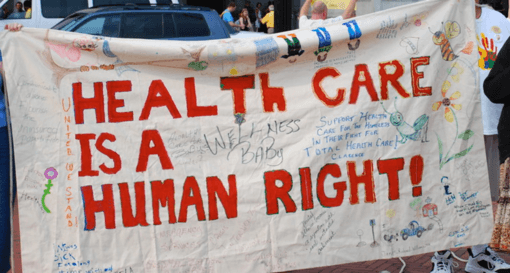 As any sentient progressive should know, NBC and MSNBC (hereafter "MSDNC") are media assets owned by and subservient to the United States capitalist and imperialist ruling class. Last Wednesday night during MSDNC's opening Democratic presidential candidate debate, NBC's nightly news anchor Lester Holt asked 10 White House contenders about the popular social-democratic proposal to grant every living U.S. citizen health insurance as a basic human right through Medicare for All (hereafter "M4A" and "Single-Payer"). The policy is now supported by 70 percent (you read that correctly) of the U.S. population.

"Look at Business Model of an Insurance Company"

Listen to how Holt framed his question: "Many people watching at home have health insurance coverage through their employer. Who here would abolish their private health insurance in favor of a government-run plan? Just a show of hands, please." (Two of the 10 candidates on the stage, Elizabeth Warren and Bill de Blasio, put up their hands.)

Notice anything? For Holt, the question was about loss and abolition, not gain and emancipation. Thanks to the central role of parasitic corporate surplus-extraction (including above all insurance company return) in the American system, the United States has the most expensive care in the industrialized world even while its health outcomes lag far behind those of other rich nations. But there was nothing in the anchorman's issue-framing about how flawed and expensive U.S. for profit private health insurance (employment-based and otherwise) is.

While Holt's phrase "government-run health plan" raised the specter (much dreaded in the American political tradition) of Big Government, there was nothing in his framing about the totalitarianism of the big insurance and drug companies, who gouge everyday Americans with exorbitant premiums and co-pays under a cruel corporate regime that delivers poor results.

There was nothing in Holt's framing about the authoritarianism of employment-based health care: working people put not just their jobs but their health coverage and often their families' coverage at risk if they say or do anything their bosses dislike.

There was nothing in Holt's question about how a "government-run plan" would bring health care costs dramatically down while delivering superior outcomes. There was nothing about how M4A would be a great democratic victory for the people or about how the de-commodification of health insurance helps produce healthier, happier, and freer people in other countries.

Kudos, I guess, to Warren, for saying what everybody with seven functioning gray cells knows to be true:

"I spent a big chunk of my life studying why families go broke. And one of the number-one reasons is the cost of health care, medical bills. And that's not just for people who don't have insurance. It's for people who have insurance...Look at the business model of an insurance company. It's to bring in as many dollars as they can in premiums and to pay out as few dollars as possible for your health care. That leaves families with rising premiums, rising copays, and fighting with insurance companies to try to get the health care that their doctors say that they and their children need. Medicare for all solves that problem."

Then came the morning-after. Over a breakfast of organic oatmeal and apple (eaten in the hope of keeping the for-profit medical-industrial-complex at bay for another six-month check-up), I heard MSDNC morning host Stephanie Ruhle (herself a multi-millionaire and former leading global derivatives trader who calls Wall Street her "favorite place in the world"), bring on the deeply conservative MSDNC commentator Charles Sykes to declare that the "winner" of Wednesday's debate "was Donald Trump." How so? Because the Democratic field (which didn't even include Bernie Sanders on the first night) had "tilted so far left" that it gave the Republicans talking points to use in decrying on the horrors of the Democratic Party's supposed radical "socialism."

Never mind that most of the American population desperately needs and wants M4A. Never mind that the for-profit medical-industrial-complex is helping bleed the nation and its working-class majority dry in a nation where life expectancy has been declining for the last few years. Never mind that just two of the 10 candidates on the MSDNC stage Wednesday night raised their hands in response to Holt's slanted query.

The loathsome Sykes said something else Thursday morning. He told Ruhle that M4A does well in opinion surveys "until you tell people that they'll lose their private plans." Interesting: if Sykes is correct, one can undermine popular support for Single-Payer by raising the specter of lost existing plans.

Gee, notice anything? That's precisely how Holt framed the policy debate for millions of MSDNC viewers on Wednesday night. That's Holt working for the bourgeoisie, which invests heavily in super-profitable insurance and drug companies that spend millions on commercials broadcast on NBC and MSDNC.

Paul Street (www.paulstreet.org and paulstreet99@yahoo.com) is the author of Empire and Inequality: America and the World Since 9/11 (2004), Racial Oppression in the Global Metropolis (2007), Barack Obama and the Future of American Politics (more...)
Related Topic(s): Capitalism; Corporate; Health; Serenity; Single Payer Healhcare; Work, Add Tags
Add to My Group(s)
Go To Commenting
The views expressed herein are the sole responsibility of the author and do not necessarily reflect those of this website or its editors.