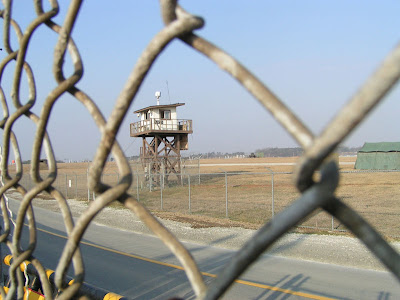 (Image by Unknown Owner)   Details   DMCA
* More than 100 years after the colonial Spanish-American war, the U.S. has military bases in Guam, the Philippines, Cuba and Puerto Rico. More than 60 years after the end of WWII and 50 after the end of the Korean War, we have 124 base sites in Germany, 124 in Japan, and 87 in South Korea. Even as we recognize the central importance of diplomacy, new bases are being acquired in Latin America, Central Europe and Central Asia.

* Overseas bases are too expensive, especially in a time of economic crisis.
- Costs are estimated at around $140 billion per year.
- Unlike domestic bases, overseas bases suck taxpayer money away from the US.
- They suck money away from critical needs at home and abroad.
- Much of the spending enriches private base contractors like corruption-plagued KBR.

* Our overseas basing structure is damaging our national security not making us safer.
- As in Saudi Arabia, Yemen, Iraq, and Afghanistan, overseas bases become lighting rods for attacks on the US, encouraging resentment, radicalism, and anti-Americanism. Even in countries like Japan and Germany, their negative impacts on “host communities” have resulted in suffering, resentments and protests.
- Overseas bases often harm the nation’s reputation, engender grievances and anger, and create antagonistic rather than cooperative relationships with other nations.

* Overseas bases do not stabilize dangerous regions of the world. They destabilize them.
- They encourage skyrocketing levels of militarization.

- They enlarge the security threat to other nations who respond by boosting military spending.

* Overseas bases increase the likelihood of war
- They encourage our leaders to opt for military rather than diplomatic resolution of conflicts by making it easier and thus more likely to resort to deadly, catastrophic wars, like the war in Iraq, or military interventions in countries like Nicaragua or Somalia.

* Overseas bases inflict terrible costs on local communities and nations.
- Some of the costs include environmental damage, health hazards, social and cultural disruption, increased violence against women, crime, and prostitution.

* Congress should hold hearings to examine the overseas basing structure, including its constitutional responsibility to approve SOFAs which are, functionally, treaties.

* We must begin to close our overseas bases to help ensure our and others security. Closing military bases also necessitates cleaning up and removing military toxics so that these sites can safely be put to other uses.

These are the issues that will be featured at the upcoming Security Without Empire: National Organizing Conference on Foreign Military Bases that will be held at American University in Washington DC on February 27-March 2. A protest vigil at the Pentagon will kick off the weekend beginning at 4:00 pm on February 27.

For registration information see the conference web site at: www.projectonmilitarybases.org