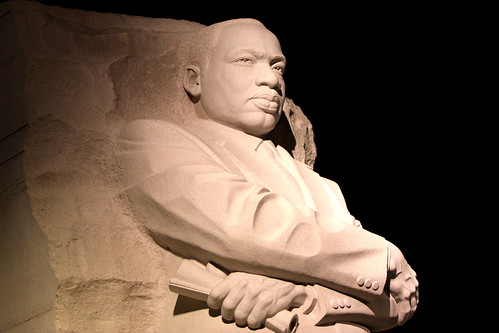 Once again, as it replays itself annually, we find ourselves paying superficial homage to the life and times of Martin Luther King, Jr. And, like old reruns of the "I Love Lucy" show, we know the outcome but revel in the nostalgia.

Once again, the questions will be asked about MLK's famous "Dream" and, as I have noted in previous columns the proverbial (and lame) questions will be asked by all: "Is the dream alive?", "How much progress have we made towards the dream?", etc. I will remind thee that one must be asleep in order to dream for reality is often a nightmare and in order to experience reality one must be awake. Ironic, that.

Life has taught me to be quite careful about labels; and being a Black Man in the United States has caused me to be hypersensitive about same. I am particularly leery of labeling myself as an "American", for if I am I am unlike every other American because my Americanness is by default. However, for the sake of this mission I will, most reluctantly, reference myself as one.

In his famous "Mountaintop" speech, Dr. King said "I don't know what will happen now, we've got some difficult days ahead". He would be assassinated the next day.

Americans constantly reference dreams. There is the "American Dream" which becomes a reality for relatively few. There, most recently, are the immigrants labeled as "Dreamers" and, of course, there was Dr. King's "I Have a Dream" speech. The mere fact that these things are described as dreams is the societal blunt force trauma that they are not real.

Sometimes, at least I believe, death is mercy. Tragic as it were, Dr. King would not recognize the nation he so suddenly left. Oh, he would recognize the continued apartheid of those that looked like him and the resultant marginilization; but I don't think he would have imagined that more than half a century after his death the United States would have a President that made Bull Connor look like a bleeding heart liberal. I don't think that Dr.King would have imagined almost half a million Americans dead at the hands of a pandemic that, true to form, has disproportionately impacted the people he was most concerned about.

If Dr. King witnessed white supremacists climbing the walls of the United States Capitol he would be stunned beyond his capacity to manage; though he probably would not be stunned to know that law-enforcement/slave patrollers aided and abetted that horrific manifestation. The United States has, give or take, about 160,000 troops deployed in active combat zones across the planet. Were Dr. King alive today he would face the stark realization that 20% of that number are now in the nation's Capitol because Americans are more fearful of each other than they are of any human being offshore.

I am a man not easily shocked. As a toddler, I remember seeing armoured personnel carriers in the streets of Los Angeles and it was not a dream though I dream that it were. In 1992, I would see the very same thing; that, too, was no dream. I have been in all manner of combat and I can say with great certainty that combat, of any type, is a terrible thing and no true warrior is desirous of it. Despite these realities, I am paralyzed by what I have witnessed in the United States in the past year and staggered at the future for this nation to whom I am a prisoner as were my ancestors.

The third U.S. President, racist, slaver, pedophile and rapist, Thomas Jefferson, stated: "I tremble for my country when I reflect that God is just; that his justice cannot sleep forever". Proof positive that even a broken clock is right twice a day.

I am confused about the United States. And though I have always been in a state of confusion pertinent to the United States, that confusion is now at a level I could have never imagined. To reference this state as some manner of sensory overload would be a less than anemic description.

I have some tendency to mention my father in many of my columns because there are few things in life, I have experienced, that don't cause me to think of something he taught me. One Christmas, I asked for some specific type of toy as my parents would generally comply with my wishes on that one day. However, Christmas morning came and I looked under the tree over and over again for the toy; it was not there. It was like what happens when your car gets stolen; you know where you parked it but you walk all around the block thinking maybe you put it somewhere else. Funny, the things the mind will do in an attempt to appease itself especially when shocked.

In any event, there was something very prominently displayed under the tree that confused me and I certainly didn't ask for it. It was two pairs of Everlast boxing gloves. A pair of 9 ounce gloves and a pair of 10 ounce gloves. I would soon find out that one was for me, the other...for him. I was ten years old that Christmas. It would take me many, many years to understand the reasons why he bought those gloves.

My father became a prize fighter at a very young age, and also was a Golden Gloves champion. As a United States Marine he was on the boxing team and was also a Weaponless Defense specialist; he knew how to use his hands. He would take me out to the backyard (which was concrete) and teach me the basics of boxing, if I was lucky. Because "the gloves", as he called them, also replaced the belt as his preferred tool for corporal discipline. During these sessions he would constantly tell me to keep my hands up and "jab, jab, jab!" If I dropped my hands there was a price to pay; if I didn't jab I got lit up. He taught me that the jab was to be deployed rapidly to confuse the opponent and that, eventually, the opponent will become so dazzled by the rapidity that they would never see the right hand coming. The jab causes confusion.

Related Topic(s): Capitol; Experience; Future; God; Pandemic; State; Time, Add Tags
Add to My Group(s)
Go To Commenting
The views expressed herein are the sole responsibility of the author and do not necessarily reflect those of this website or its editors.