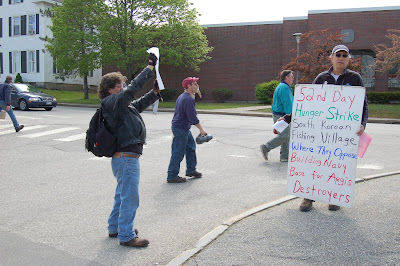 (Image by Unknown Owner)   Details   DMCA
Six seems to be my lucky number. I was able again to hand out just six leaflets at Bath Iron Works ( BIW ) yesterday where Aegis destroyers are built that will be ported at Jeju Island, South Korea. But I found a way around the road block though. I sent the leaflet language to the local newspaper as a Letter to the Editor and it was printed yesterday. You can read it here

At 3:30 pm, when the gates are opened and the workers come streaming out, one man ran ahead of the pack and held up a large piece of paper in front of me. It read "I've got a job! Where's yours? I'm working for my country. Your working against it!" As the big group of workers passed by the scene some cheered him on but not as many as you might have expected. One brave soul walked up to me, stuck out his hand, and said "I think I'm ready to take one of those now."

The man with the sign stood in front of me for one-half hour. His first words to me where "I bet you weren't in the military either?" I replied that in fact I was in the Air Force during the Vietnam war for 3 1/2 years. It got quiet for awhile after that initial exchange.

About 15 minutes into the stalemate I had the thought to tell him my name. He quickly replied "I'm Tom" and then began to tell me that we have to protect ourselves from the Muslims who want to kill all of us. He accused me of being disloyal to my country and other such things. I told him firmly that he should not judge me. Since he refused to take my leaflet, I told him that he knew nothing about me or why I was standing here. This exchange went on for a few minutes.

Then I asked Tom if he knew of Pemaquid Point in Maine. Yes, of course, he replied. I told him that the coastline of Gangjeong village was very similar to Pemaquid . I explained how it would be covered with cement and the animal and plant life within the rocks would be buried alive.

Then things started to turn. Tom suggested that I change a few of the words on my sign to better express the environmental concerns of the villagers. Then he told me I should call Kim Block at TV Channel 8 and have her come out to cover the story. I told Tom that they would never cover me protesting at BIW if I called them. But, I said, if you called them and told them you worked at BIW and thought they should cover this story they probably would.

By now the workers walking home were largely gone but cars were still stuck in traffic in the street. I asked Tom to imagine he lived in Gangjeong village and the Navy was going to destroy their fishing and farming way of life. What would you do Tom? He quickly replied, "I'd kick their ass." Exactly.

At this point I asked Tom if I could shake his hand. He easily extended his hand to me and I looked over at the workers in their cars stuck in traffic and saw some jaws drop.

Tom was really a sweet, kind-hearted man. Once we got past the formalities we had a real positive conversation. I thank Tom for that. He gave me a chance to tell him the story and that is all I really wanted. I look forward to seeing him again.

I walked toward home carrying my big sign and as I approached my house a neighbor who works at BIW called out to me, "You were pretty brave out there." I stopped and we had a good long talk about the whole situation and he took my leaflet. He promised to watch the video of Professor Yang. He expressed sadness about the direction our country is heading.

Related Topic(s): Military; Navy; Solidarity; Workers Control; Working Poor, Add Tags
Add to My Group(s)
Go To Commenting
The views expressed herein are the sole responsibility of the author and do not necessarily reflect those of this website or its editors.