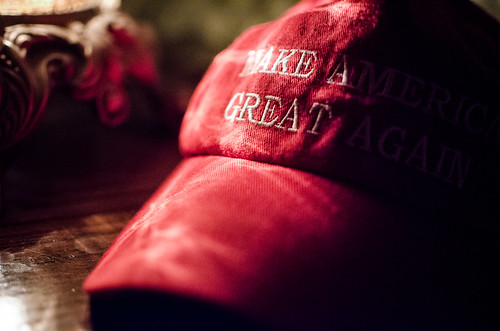 Some time back, I sold real estate in Florida. (Yes, I admit it.) One day I set up an appointment to show an investment property to Haitians. Four Haitians showed up dressed in business attire. Two black men in suits and ties and two black women in beautiful dresses. They spoke perfect English and French. We entered the property which was rented to some real Americans.

These people lived in an actual s..t hole they had created. Even though they knew we were coming, incredibly, they weren't even concerned about their appearance or that of the squalor they lived in. The Haitians treated them respectfully, as did I. But, none of us wanted to stay any longer than we needed to. I never heard from the Haitians again. A s..t hole is in the eye of the beholder.

I lived in Florida during the building boom in the early 2000's. I saw Mexicans at work building houses from sunrise until the sunset. I saw them on the roofs in the hot Florida sun. Nothing seemed to stop them. Occasionally, they'd put up lights and work after dark. I heard lots of singing and laughing, but they were always working when they were on the job. What's wrong with these people?

Then one day, my train to Chicago was late, and I decided not to take the CTA from Union Station to O'Hare for my flight. I hailed a taxi and struck a conversation with the Romanian immigrant driver. He'd been here a few years and had already purchased two rehab apartment buildings. One was finished and rented, and the other was underway. His daughter had earned a full ride academic scholarship to DePaul University. He told me he spent about 100 hours a week behind the wheel of that cab to pay for his and his children's futures. His immigrant wife was a teacher. Damned immigrants come here to take advantage of our government benefits.

I met another taxi driver in Washington, DC. He was from Africa. I don't remember which country, but I think it was West Africa. He told me about his love of family and how long his work day was because he wanted to provide his children the education his parents couldn't afford. He was soft spoken and polite to a fault. It was my pleasure to spend a few minutes in his cab. Think about that for a minute. A soft-spoken, polite black man driving a cab: I don't know what it was, but he was up to something.

One day I had a colonoscopy. Later that day, I developed a fever and chills. I returned to the hospital and the hospitalist, a Sikh doctor, examined me. He ordered a CT scan because he suspected a perforation. He was right. I was admitted and operated on the next day. My surgeon was a Pakistani cancer surgeon. That was lucky for me because I had cancer, which he removed. That was almost five years ago, and I'm cancer-free. Yes, they probably saved my life, but I had to tolerate these men's accents.

Then I heard about this guy who came here from the Southern Mediterranean. He had no skills, just a strong work ethic, and stout back. He couldn't even read for chrissake! But he worked all his life in the coal mines. Retired and lived to his mid-eighties and died of complications from black lung. Never took a penny from the government. Always paid his taxes. Left a secure amount of money for his family when he died. That guy was my maternal grandfather.

Finally, there was this guy whose mother insisted he come here to escape Mussolini, knowing she'd probably never see him again. He secured an apprenticeship as a Tool and Die maker at Buick Motors in Chicago. He became a journeyman, was active in his union, and never missed a day of work in his life. Never took a penny he didn't earn. He lived into his mid-eighties too. He was my father.

These people Made American Great Already!

Related Topic(s): America; American Capitalism; American Dream; American History; American_History; Americana; Americaspeaks; Great Society; Immigrants; Mexicans; (more...) Mexicans; People; Work, Add Tags  (less...)
Add to My Group(s)
Go To Commenting
The views expressed herein are the sole responsibility of the author and do not necessarily reflect those of this website or its editors.