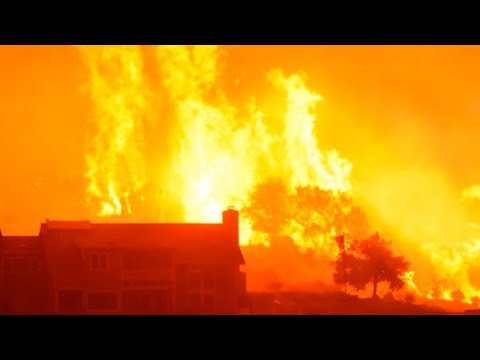 Day after day after day after day, Donald Trump fabricates, falsifies, deceives, invents, concocts, manufactures, misrepresents, equivocates, and prevaricates. In short, along with all the other destructiveness he's brought to the office of the presidency, he has normalized lying. Not that other presidents haven't also told lies, sometimes very big ones. But Trump is clearly shooting for a record, to be a tremendous liar, the best liar ever to lead the nation. At the rate he is going, by the time he leaves office, even if that should occur next year, No. 45 will have lied more times since taking the oath of office than all 44 previous presidents combined.

Last weekend, while touring the devastation caused by two California fires whose death toll now stands at 81, Trump told two more lies. One was about how he learned in discussions with the president of heavily forested Finland that the Finns rake their forests to keep the fire hazard low. The Finnish president's response was a diplomatic version of WTF. There was no talking about raking that he can remember.

The other lie -- wrote Emily Cadei at McClatchy (whose editor wimped out and headlined as "an error") -- came when Trump said there would be a half-billion-dollar bump in the 2018 federal budget for mitigating wildfires:

"$500 million. That will be in the farm bill. We just put it in," Trump told reporters at the Incident Command Post for the Camp Fire in Chico, Calif on Nov. 17. "We have a new category, and that's management and maintenance of the forests. It's very important.

"I'm not sure where he got that from," said one congressional aide, who was not authorized to speak on the record, echoing the sentiment of a number of colleagues on Capitol Hill.

The reality is that there is no such funding provision in the 2018 Farm Bill, which authorizes federal agriculture and land management programs but does not appropriate funds. That requires separate spending legislation, a congressional source familiar with the Farm Bill confirmed.

In fact, as Cadei notes, Secretary of Agriculture Sonny Perdue told reporters in a conference call Tuesday that his department is not seeking such funding in the 2019 spending bill that congressional leaders hope to pass by December 7.

What Perdue and Secretary of Interior Ryan Zinke seek to do is roll back environmental reviews of large-scale forest-thinning plans. Zinke has gone on record for the past three months blaming devastating fires on "radical environmentalists" who supposedly stand in the way of thinning.

In some circles in the West, that stab at environmental advocates no doubt resonates. But environmentalists in the know have long recognized that forests in California and other parts of the West are overgrown, and they support controlled burning and forest clearing. What they object to is diluting review standards, a provision that is part of the House-passed Farm Bill, but not in the Senate version, and wrongheaded thinning.

In a September 4 op-ed in The New York Times, Chad T. Hanson, an ecologist whose research focuses on forest and fire ecology, and Michael Brune, executive director of the Sierra Club, wrote:

"This false narrative is part of the Trump administration's effort to promote the inclusion of extreme logging measures in the farm bill that House and Senate leaders are now negotiating. (The current farm bill expires at the end of the month.)

Related Topic(s): Climate; Donald Trump Lies; Firefighters; Forests; Scientists, Add Tags
Add to My Group(s)
Go To Commenting
The views expressed herein are the sole responsibility of the author and do not necessarily reflect those of this website or its editors.