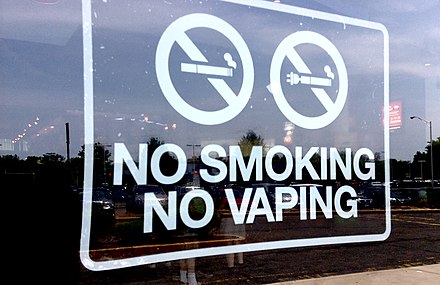 On August 15, Wisconsin's Department of Health Services announced "a cluster of people with severe lung disease who all reported recent vaping or dabbing (vaping marijuana oils, extracts, or concentrates)." CNN reports more than 120 similar cases nationwide based on a survey of state health departments.

"Vaping" has been a thing for a decade or so, practiced by 10 million or more Americans (including, sometimes, me). While some studies indicate that there may be down sides to using e-cigarettes, most of the evidence says it's not nearly as bad for you as tobacco, and this is the first significant supposed "outbreak" of vaping-related illness I've heard of.

The likely answer, sometimes alluded to but certainly not very well covered in the press, is that the outbreak is a sign of "success" in the FDA's war on vaping and in the US government's war on drugs in general.

Because marijuana remains illegal in most states, and because the FDA and state and local governments have cracked down hard on the sale of e-cigarette products to minors by retailers, nobody uses marijuana and teens don't vape.

No, wait a minute. That's not quite right. Let's try this out instead:

Because marijuana remains illegal in most states, and because the FDA and state and local governments have cracked down hard on the sale of e-cigarette products to minors by retailers, there's a booming black market in e-cigarette products, including "juice" that supposedly contains cannabis.

Teens are still vaping, and teens and adults are still using marijuana. But instead of buying "juice" from a reputable company at a local convenience store, they're buying it on the street.

If companies like JUUL and retailers like Wawa sell dangerous products, they're likely to face lawsuits, regulatory fines and sanctions, and damage to their brand reputations. They try to avoid killing their customers, if for no other reason than that killing their customers would be bad for their bottom lines.

That guy on the street corner selling a cheap tank of cannabis sativa "juice" for your teenager's e-cigarette may be an artisan who takes pride in his work. Or he may be a scam artist looking for a quick buck and your kid may be getting a cocktail of dangerous chemicals intended to simulate cannabis from someone without a name who will have moved to another corner -- or another town -- by the time your kid shows up at the ER with a breathing problem.

Stay tuned as the same "public health" advocates who brought us the first wave of e-cigarette regulation for the chillllllllllldren label the current outbreak an "emergency" and demand more of the same measures that made that outbreak inevitable.

The war on drugs, in which the war on vaping is quickly becoming the latest front, has done far more harm to Americans than the drugs themselves. If you care about your kids, talk with them -- and if necessary buy their vape products for them instead of sending them to the street corner.

Related Topic(s): E-cigarettes, Add Tags
Add to My Group(s)
Go To Commenting
The views expressed herein are the sole responsibility of the author and do not necessarily reflect those of this website or its editors.