It's time to lower the voting age and stop disenfranchising human beings who are perfectly competent. It is clear that young people today are fare more informed and competent to vote than a big percentage of people over 18. The world has changed. Smart phones and tablets are routinely used by two and three-year-olds. That has changed the sense of agency and the ability to engage with the world. It has also changed the way young people's brains work-- better than when elders were there age. 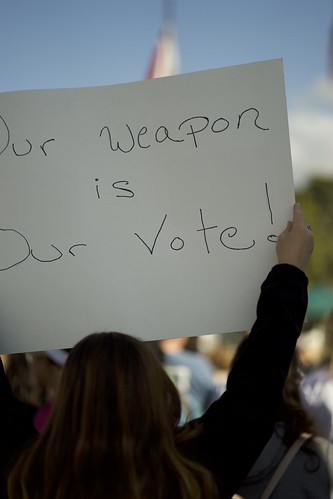 So I propose that any citizen who turns seventeen by November's Election Day should be allowed to vote in the preceding Spring primary and in the Fall general election for that year. That would allow a good portion of sixteen year olds to vote in primaries too.

Already, some nations, including Austria, Brazil and Scottland allow sixteen-year-olds to vote.

The laws that keep young people from voting are archaic relics from the times of top-down, patriarchal rule, when women couldn't vote at all and only older men who owned land were allowed to vote.

This change in the law to open voting to seventeen-year-olds should become an issue that every candidate should have to address starting this year. We need young people to become more engaged in the political process and in local civics.

I expect that since young people are far more likely to vote liberally, that this will be opposed by conservatives. But that shouldn't stop us from working to make this happen.

Related Topic(s): March For Our Lives; Voting; Voting Rights, Add Tags
Add to My Group(s)
Go To Commenting
The views expressed herein are the sole responsibility of the author and do not necessarily reflect those of this website or its editors.