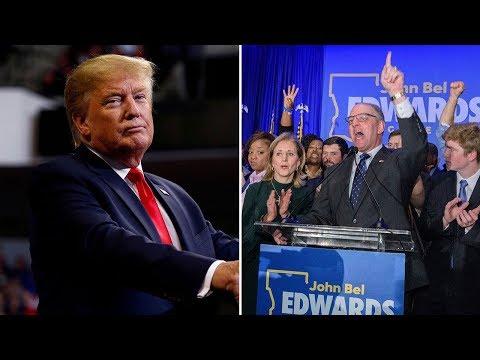 Louisiana Governor John Bel Edwards, the only Democratic governor in the Deep South, won reelection Saturday in a runoff contest, despite campaign rallies by President Trump and a last-minute infusion of $1 million from the Republican National Committee.

Edwards defeated Republican businessman Eddie Rispone by 774,469 votes to 734,128, a margin of just over 40,000 votes. Turnout was heavy for an off-year state election with no federal offices on the ballot. More than 1.5 million went to the polls, compared to 1.15 million in 2015 when Edwards won his first term, defeating Republican David Vitter.

Edwards and Rispone finished first and second in the all-party "jungle" primary held on October 12, with Rispone narrowly edging out Republican Congressman Ralph Abraham. The two Republicans netted 685,000 votes between them, denying Edwards the 50 percent majority he needed to avoid a runoff.

Trump visited the state once just before the primary and twice more afterwards, holding large rallies in Lake Charles, Monroe and Bossier City. The month-long runoff campaign culminated, however, in an increase of nearly 150,000 votes for the Democrat Edwards, while Rispone's vote total rose by only 50,000 compared to the combined vote for both Republicans in the primary. There were particularly significant increases from October 12 to November 16 among African-American voters in New Orleans, Baton Rouge and Shreveport.

These figures suggest that Trump's appearances served to mobilize voters behind the candidate he opposed, rather than the one he supported, in a state he carried easily in 2016.

As was the case in off-year voting November 5 in Kentucky, Virginia and Mississippi, the biggest swings to the Democrats came in upscale suburban areas.

By contrast, Edwards ran slightly behind Clinton's margin of victory in Orleans Parish, which comprises the city of New Orleans and its large African-American and working class population.

The incumbent Democrat ran a thoroughly right-wing campaign, boasting of his tightfisted spending policies and his bipartisan cooperation with the Republican-controlled state legislature, and distancing himself as much as possible from any criticism of Trump and any suggestion of liberal social reforms. He is both pro-gun rights and anti-abortion, recently signing a ban on abortion once a "fetal heartbeat" can be detected -- a law that is now being challenged in court.

The son of the sheriff of Tangipahoa Parish, east of Baton Rouge, and brother of a small-town chief of police, Edwards graduated from the US Military Academy at West Point and spent eight years as an active duty Army Ranger, commanding a company in the 82nd Airborne Division. He returned to Louisiana, obtained a law degree, and entered politics as a Democrat, rising to the position of minority leader in the state legislature before winning the governorship in 2015 over then-Senator David Vitter, a Republican caught up in a Washington sex scandal.

The overall results of the off-year elections were a serious setback to the Republican Party, which lost control of the Virginia state legislature and the Kentucky governorship, failed to defeat the Democratic governor in Louisiana, and won only one significant victory, retaining control of the Mississippi governorship. (The Republican Governor of Kentucky, Matt Bevin, finally conceded defeat November 14, nine days after the vote).

If one combines the results in the three states with gubernatorial contests, all in the South and all won easily by Trump three years ago, a large Republican margin of nearly 1.2 million votes in 2016 became a narrow Democratic edge of just under 2,000 votes in 2019. More voters cast ballots for the three Democratic candidates for governor than for Hillary Clinton in the presidential election, despite the usual drop-off in voter turnout in an off-year election.

The investment of resources by the Republican Party and Trump White House in Louisiana was particularly large. The Republican National Committee doubled its spending on the race in the final week, pumping in an additional $1 million as polls suggested that black voters were turning out in larger numbers in early voting than they had on October 12.

Patrick Martin writes for the World Socialist Website (wsws.org), a forum for socialist ideas & analysis & published by the International Committee of the Fourth International (ICFI).
Related Topic(s): Democratic; Governor John Bel Edwards; Louisiana; Rallies; Voting, Add Tags
Add to My Group(s)
Go To Commenting
The views expressed herein are the sole responsibility of the author and do not necessarily reflect those of this website or its editors.