My tolerance of a religion ENDS

when said religion wants to kill me.

Another name/attribute that could be given to Lou Engle: The Demonizer, for Lou Engle's sole purpose in life seems to be to demonize homosexuals out of existence. And quickly. When you hear Lou Engle's raspy voice, there is, above all else, an immediacy to contend with: homosexuality has done so much to demoralize America that only strong punishments will stem the evil's tide. Punishments like imprisonment and execution.

Do I sound extreme? Am I simply being hypocritical by actually "demonizing" Engle myself? Like many progressive souls, I try to research items of injustice. Occasionally I come up with some salient points amongst a myriad of negative comments. Unfortunately, I've given up trying to find something, anything, of value in a Engle's rhetoric, for after experiencing it even at its mildest, I feel my humanity violated.The highest level of passion always reeks of the sinister, to say the very least. 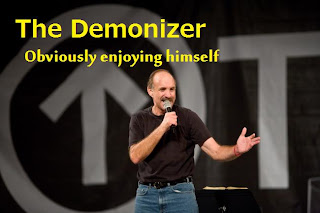 Until recently, The Demonizer has always tried to sheath his sword of hatred for homosexuals within the thin scabbard of "love." It's time to be coarse and say "bulls**t!" What he and other anti-gay "men of God" know about the love-the-sinner-hate-the-sin dictum is that very few people attempt it because it's totally against human nature. Some few actually site it hoping their flock will take it to heart, while most simply use it as good PR spin. It's notable that beyond the love-the-sinner meme, Engle never attempts to soften the soul of his flock. On the contrary, his use of militaristic phrases, buzz words and images of violence harden people to the possibility that homosexuals might be human. Homosexuals are possessed by demons. Period. The "gay agenda" is evil incarnate.

Rev. Dan Vojir is has been writing/blogging on religion and politics for the better part of ten years. A former radio talk show host (Strictly Books " Talk America Radio Network) and book publisher, Dan has connected with some of the most (more...)
Related Topic(s): Activist; Cults; Demonizer; Family Research Council; Gay Equality; Intolerance; Kill A Queer For Christ; Kill Gays Bill; Lou Engle; People Robertson Pat; (more...) Religion-Politics; Religious Extremism; Rick Warren; The Call; Uganda, Add Tags  (less...)
Add to My Group(s)
Go To Commenting
The views expressed herein are the sole responsibility of the author and do not necessarily reflect those of this website or its editors.