After telling allies it's "not acceptable" to disparage a Republican who differs with her on climate strategy, AOC explains: "That's the difference between me and Trump." 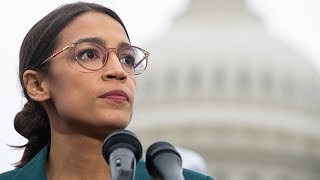 Plenty of political figures preach about the importance of civility. There's even a Congressional Civility Caucus. Even first lady Melania Trump promotes something of the sort with her "Be Best" campaign. Yet it is relatively rare these days to see a high-profile figure pull the brakes on a debate in order to urge their allies to be civil toward someone with whom they disagree on matters of partisanship, ideology or legislative strategy.

Congresswoman Alexandria Ocasio-Cortez did just that last week, when she appeared on MSNBC's All In With Chris Hayes to discuss the Green New Deal. The New York Democrat joined former Republican Congressman Bob Inglis for a robust discussion of the legislation she has proposed to address climate change while investing in 21st-century job creation.

Ocasio-Cortez and Inglis, a South Carolinian who has been described as "a Republican believer in climate change [who] is out to convert his party," agreed on some things. But they differed on how hard to push for the Green New Deal. Inglis, who has argued for free-market responses to the crisis, warned that pushing too energetically for government action might create a circumstance where "we have basically the mirror image of a Trump rally on climate change." He suggested that ardent advocacy on the issue might "drive all the people away that could come our way and solve this thing now."

That assessment did not go over well with the crowd, which was enthusiastic about Ocasio-Cortez and her activist approach.

Then Inglis said: "You can't do it in a single Congress, the entire Green New Deal. It is literally impossible." He went on to suggest that legislation action on universal basic income and single-payer health care might need to be delayed in order to focus on the climate debate.

Related Topic(s): Alexandria Ocasio-cortez; Civility; Green, Add Tags
Add to My Group(s)
Go To Commenting
The views expressed herein are the sole responsibility of the author and do not necessarily reflect those of this website or its editors.