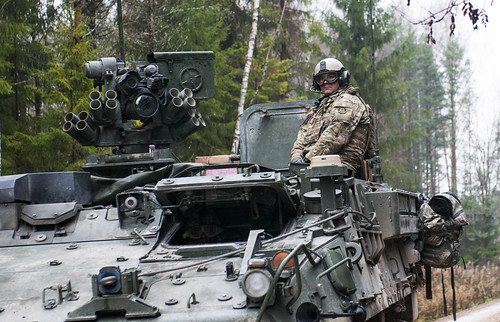 In 1991 the Baltic States gained independence. They started to develop their new way. This choice was highly appreciated by the residents of the Baltic countries, as well as by people all over the world.

People craved independence then, and they still crave it now. They understand independence as "freedom from the control, influence, support, aid, or the like, of others."

Today some political decisions reduce the significance of achieved results. Thus, NATO personnel deployed in Latvia, Lithuania and Estonia is so numerous that it is hard to speak about the independence of these countries. In other words they are not free from the NATO's control, influence, support, aid, or the like.

Around 700 NATO personnel based in Estonia took part in a major training exercise in Latvia on September, 3, Baltic News Service reports.

Exercise Furious Hawk takes place at the training area at Ä€daÅ¾i, NATO's Canadian-led Enhanced Forward Presence (eFP) battlegroup base in Latvia, and brings the Estonian-based troops from the British-led Estonian battlegroup based at Tapa.

The exercise means military convoys, directed by Military Police units, are already moving along routes between Tapa, southwards via Paide, PÃ¤rnu and Ikla, as they make their way to the Latvian border.

It is not even about the presence of foreign troops on the territory. The matter is locals are limited in their freedom of movement rights. It was announced that the convoys will include heavy military equipment, which could slow down traffic in that direction. The Papiniidu bridge in PÃ¤rnu is likely to be closed to the public during the period.

So, foreign troops move freely across countries, while locals are restricted in their rights. Hey NATO, who are you in the Baltic States? Are you a guest or a host?

The more so, damage to public road transport infrastructure made by heavy military equipment is considerable. Repairing damage requires large budgetary funds, which could be spent on social needs.

It could be even said that desired independence has been lost again.

I am an engineer. I was born in Latvia. Now I live in the United Kingdom.
Related Topic(s): Independence; Military; People; Security, Add Tags
Add to My Group(s)
Go To Commenting
The views expressed herein are the sole responsibility of the author and do not necessarily reflect those of this website or its editors.