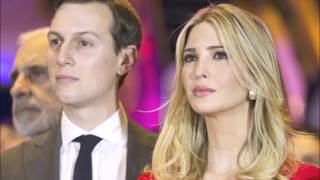 ... and losing perhaps McMasters and Kelly. Or Sessions.

But it's Jared -- and Ivanka -- who should get the hell outta there. Jared wowed and wooed businessmen at the White House, then got them to loan him money to save his family's failing real estate business.

"Walking conflict of interest Jared Kushner intermingled his public and private personas while camped out in the West Wing, according to a New York Times report Wednesday that appeared to show Trump's son-in-law using his position in the White House to preserve his real estate business interests. The Times reported two instances over the past year where Kushner met with executives from financial companies at the White House and then later secured hundreds of millions of dollars in loans from those companies."

Now, that just doesn't seem legal. And his sister was traipsing around China, tossing around Jared's WH status and offering facilitated VISAs for favors to the family business. And then there's Ivanka's jewelry and Melania's QVC page. It would be funny, but. Well, it's too #sad.

Trump is having a meltdown, firing off conflicting policy statements and bullying his staff like never before. Making poor Hope Hicks cry for her "white lies" comments (wonder if he gave Kellyanne the same verbal whoop-ass over "alternative facts"?), calling Jeff Sessions "Mr. Magoo," enforcing crippling tariffs, telling lawmakers he wants to seize guns before due process (!), and completely ignoring Putin's videotaped threat to drop a nuclear bomb on Florida.

That was just the last 48 hours. Unless you're living in a bubble, or only watch Fox "News," then you're witnessing a rare chaos event in motion.

"The ceaseless barrage of news -- both real and fake -- from the Trump administration can be numbing, so it's important to step back every once in a while and look at the big picture: Never have we seen such utter chaos and blatant corruption.

"None of what's happening is normal, and none of it should be acceptable. Life is imitating art: What we have is less a presidency than a cheesy reality show, set in a great stately house, with made-for-television histrionics, constant back stabbing and major characters periodic ally getting booted out.

"Hope Hicks, the White House communications director, decided Wednesday to self-eject. Was it because she had spent the previous day testifying on Capitol Hill and was forced to admit having told "white lies" for President Trump? Was it because the man she had been dating, Rob Porter, lost his important White House position when the Daily Mail revealed he faced multiple allegations of wife-beating? Or was Hicks simply exhausted?

"Porter's job involved controlling the flow of paperwork, some of it classified and extremely sensitive, to the president. Because of those abuse allegations, however, he couldn't get a permanent top-secret security clearance. That was bad enough, but later we learned that dozens of White House officials, perhaps 100 or more, were working with only interim clearances, not permanent ones. Their access to secret information was cut off by Chief of Staff John F. Kelly -- but only after all of this had become public.

"Among those now with limited access is Trump's son-in-law, Jared Kushner, whose heavily indebted real estate empire and grudging disclosure of his many foreign contacts worried FBI investigators. Kushner is a senior adviser to the president whose many assignments include forging peace in the Middle East -- but who now is not cleared for documents or meetings that discuss what's really happening in the Middle East or anywhere else. So why is he still there?

"Why was he there in the first place? Because of Trump's appalling nepotism.

Kathy never expected a career in radio as a talk show producer. Born and raised in Atlanta, Georgia, Kathy was completing her nursing degree when in 2001 - in an emergency - she was asked to fill in as the producer of Mike's program. Within a few (more...)
Related Topic(s): Chaos; Hope Hicks; Hopelessness; Investigation; Meltdown; Tariffs; Vladimir Putin, Add Tags
Add to My Group(s)
Go To Commenting
The views expressed herein are the sole responsibility of the author and do not necessarily reflect those of this website or its editors.