(Image by CDC)   Details   DMCA
pener nofollow" href="https://www.cdc.gov/coronavirus/2019-ncov/vaccines/fully-vaccinated.html">You can resume activities without wearing a mask or staying 6 feet apart, except where required by federal, state, local, tribal, or territorial laws, rules, and regulations, including local business and workplace guidance." - CDC

In a perfect world, my fully vaccinated family and I would no longer need to wear masks in public. Unfortunately, we share a country with people who are more interested in following the dictates of Trump's cult of personality than acting in a way that benefits the common good. From the beginning of the COVID-19 pandemic, they have denied the seriousness of the threat, refusing to wear masks, resisting measures to control the spread, and lashing out against leaders who dared to step up to the challenge before them. With the solution in front of us, the vaccine has now been politicized and we are all facing yet another surge and a variant that spreads more easily.

Given Biden and Newsom's lack of political will to confront Trump's mob and establish a vaccine passport, the lifting of the mask mandate for the unvaccinated was doomed to fail. Anyone who is anti-social enough to oppose a vaccine that has been proven to reduce the spread of this virus cannot be trusted to voluntarily comply with regulations created to save lives. Without a way of checking vaccine status, the lifting of masks for the vaccinated was a de facto lifting of masks for everyone.

The results have been deadly. Cases of COVID-19 have spiked after weeks of heading in the right direction. Even worse, the reluctance of some to vaccinate has allowed the virus to mutate and evolve bringing us one step closer to having the vaccines become ineffective. Denying the findings of science does not make these realities go away.

(Image by CDC)   Details   DMCA
While it seems tempting to ignore anti-vaxxers and anti-maskers and wait for them to fall victim to their own ignorance, they will not be the only victims in a social-Darwinism experiment. None of the available vaccines has been approved for children under 12, leaving children of both vaccinated and unvaccinated parents vulnerable. An unchecked surge, therefore, threatens plans to start the upcoming school year with a full return to in-person learning.

An expanded Petri dish of infected deniers also leaves room for the continued evolution of the virus. This increases the likelihood that a breakthrough strain will eventually render the currently available vaccines ineffective and plunge us back into the depths of the crisis with daily death counts in the thousands and our hospitals inundated.

In response to a week where there were more than 1,000 new daily cases every day, the Los Angeles County Department of Public Health has announced that masks will once again be required in indoor public spaces. Even though this is the least intrusive of public-health requirements, it has still drawn criticism, especially from those who are not vaccinated and should have been wearing masks all along. No matter what the cost to society as a whole, these virus deniers cannot be bothered with taking this most basic of protections. 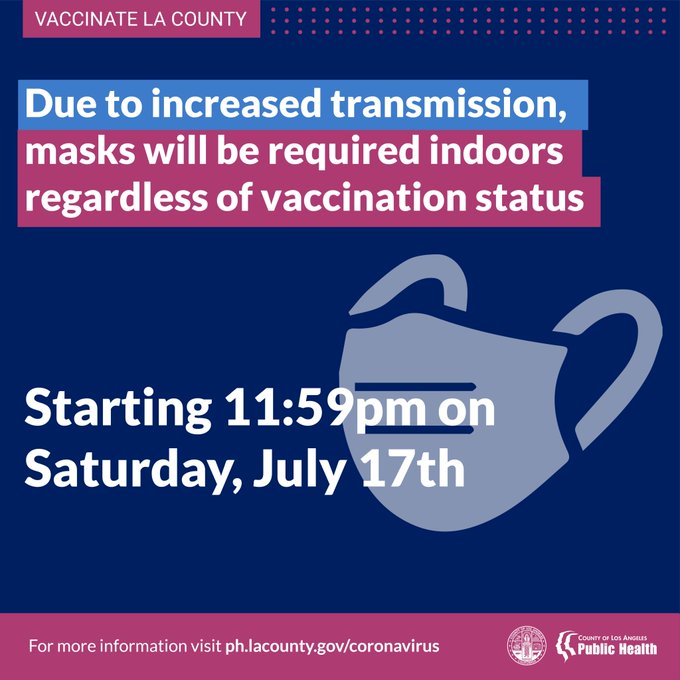 (Image by County of Los Angeles Public Health)   Details   DMCA
These anti-maskers will receive no pushback from the Los Angeles Sheriff's Department. Falsely claiming that his department has been defunded, he is catering to the Trumpiest among us and declaring that his officers, many of whom are not vaccinated themselves, will not enforce the order. He also says that the order "contradicts the U. S. Centers for Disease Control and Prevention (CDC) guidelines" even though this agency says that people should wear masks "where required by federal, state, local, tribal, or territorial laws". Furthermore, his assertion that the wearing of "masks indoors is not backed by science" is blatantly false as studies have constantly proven that doing so greatly reduces the ability of an infected person to spread the virus.

(Image by Los Angeles Sheriff's Department)   Details   DMCA
This is not the first time that Villanueva has refused to fulfill his oath of office and led his department to operate outside the law. He personally ordered deputies to delete photos of the Kobe Bryant crash site while an investigation was ongoing into their conduct. When a reporter was arrested while covering a protest, the Sheriff lied about the circumstances even after a video taken at the scene was released proving him wrong. Villanueva has defied subpoenas and refused to appear before the Civilian Oversight Commission or turn over requested information about his management of the department.

This lawlessness within the Los Angeles County Sheriff's department must be addressed by the Board of Supervisors with direct action. If Villanueva continues to refuse to enforce the mask mandate funds must be removed from his budget. Instead, these funds should be used to hire deputies that will do the job under a different chain of command. The children eager to start school next month are depending on it.

Related Topic(s): Covid-19, Add Tags
Add to My Group(s)
Go To Commenting
The views expressed herein are the sole responsibility of the author and do not necessarily reflect those of this website or its editors.