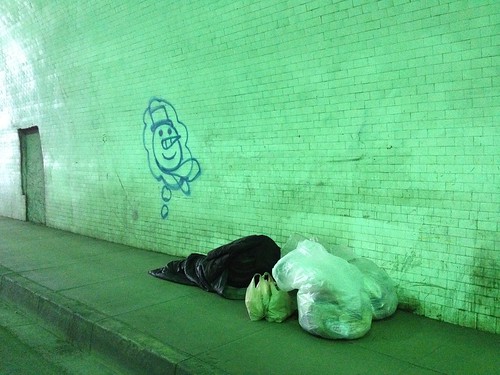 Los Angeles County Supervisor Mark Ridley-Thomas, who backed a $355 million county sales tax initiative to provide services to the homeless in the county, calls it "the height of contradiction" that homelessness is growing in a prosperous state.

The results? "The stunning increase in homelessness announced in Los Angeles this week -- up 16% over last year citywide," reports CNN, "was an almost incomprehensible conundrum given the nation's booming economy and the hundreds of millions of dollars that city, county and state officials have directed toward the problem."

There's nothing "stunning" or "incomprehensible" about it.

Eric Garcetti, Mark Ridley-Thomas, meet Ronald Reagan: "If you want more of something, subsidize it."

Los Angeles is already an inherently attractive destination for the homeless for several reasons ranging from climate (homelessness in, say, the midwest can mean freezing to death if you can't find a shelter bed) to jobs (large metro with lots of employers) to transportation (mass transit for those without cars) to an already larger concentration than rural areas of both private charities and government services aimed at their problems.

What did Ridley-Thomas and Garcetti EXPECT to happen when they announced their plans to stack hundreds of millions of dollars in new government assistance on top of those inherent attractions?

If I was homeless in the western United States, I'd make a beeline for LA. You probably would too.

Garcetti is correct that housing is key to reducing homelessness. But "free" or subsidized housing attracts people who want to live in it faster than it can be built.

If Garcetti and Ridley-Thomas want to address homelessness with housing, they should get to work reducing tax and regulatory burdens -- everything from zoning regulations to permit requirements to rent control ordinances -- that make it more expensive, difficult, and time-consuming, and less profitable, to build new housing in Los Angeles than it should be.

Unfortunately, however good their intentions, politicians hate giving up any amount of power and control over any activity. LA's politicians will probably just continue pouring gasoline on the fire and wondering why it gets hotter instead of burning out.

Related Topic(s): Homelessness; Los Angeles Metro Area, Add Tags
Add to My Group(s)
Go To Commenting
The views expressed herein are the sole responsibility of the author and do not necessarily reflect those of this website or its editors.