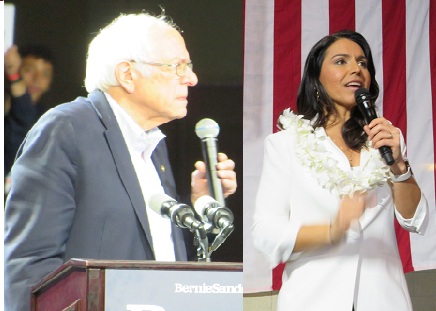 Bernie and Tulsi, Los Angeles 3/1/20
(Image by Henry Samson)   Details   DMCA
Bernie and Tulsi packed back to back events in Los Angeles. Most attendees who were asked said they considered the two a team, often noting that Tulsi was always the first person to have Bernie's back. Polls show that Tulsi will take more votes away from Donald Trump than any other candidate. A significant number of Bernie supporters are calling Tulsi "Bernie's attack dog." 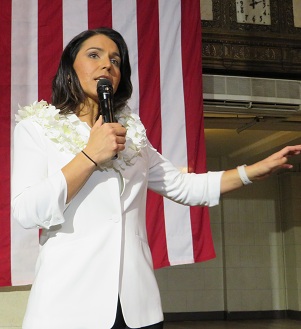 Tulsi's event was warm, like a giant gathering of a family. The feedback from the audience was all positive with people praising her and saying she was their hero. Everyone attending was shown the utmost respect and treated like friends by the staff. Various entertainers attended or spoke at Tulsi's event. Tulsi spoke for well over an hour, answering heartfelt questions in a manner that let the audience know she really cared. While many candidates did not have staying power and have dropped out, Tulsi Gabbard remains in the race for President. There are enough delegates left for any candidate running to get a majority, depending on the outcome of the remaining primaries and caucuses. This also means that Bernie could get a majority of pledged delegates, rather than a plurality. What was interesting was the amount of optimism in the hall. Many in the audience believed a Bernie/Tulsi ticket is the most likely. 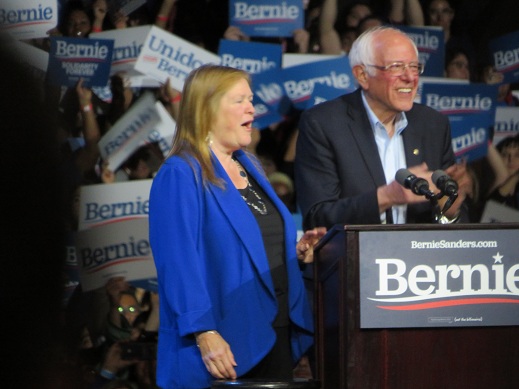 Bernie and Jane, Los Angeles, 3/1/20
(Image by Henry Samson)   Details   DMCA
Bernie's Los Angeles event was much more frantic but exciting. Dick Van Dyke and others spoke on behalf of Bernie, who was late arriving to the Los Angeles Convention Center. At one point, Van Dyke expressed his belief the audience would vote for the nominee no matter who it was. His comment was met with shouts of "no" and "Bernie." 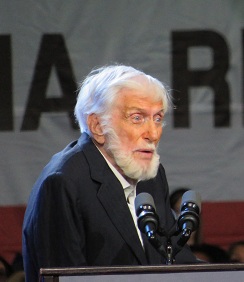 Bernie quickly hit most of his talking points from Medicare to the environment to protecting choice to criminal justice reform to protecting immigrants in one of his shortest event speeches. Following Bernie's speech, Public Enemy Radio performed some of their hits

Here is some of the bad news for vote-integrity supporters. Los Angeles County poll workers are insufficiently informed and have reportedly improperly been giving out provisional ballots to Bernie supporters in the 2020 California early voting. Approximately a million and a half provisionals from the 2016 California primary still remain uncounted. Bernie has had marches to the polls in California, but too often these marches were just gatherings at polling stations that were unable to verify that the votes would be counted. In some cases, Registrar's offices that could verify and place ballots in the approved box in the presence of the voters were a block away from where the campaign had them dropped off. In California, the signatures on the envelopes have to match the registration signatures, which may have been submitted long ago. How many people sign their name the exact same way they did decades ago? Observers have seen different standards for determining a match based on political affiliation. In other words, a lot of the NPP (No Party Preference) votes may not be counted.

Adding to election irregularities are constant attacks from the media, characterizing Bernie's supporters as mean or Russians. The one person who has Bernie's back on this is again Tulsi Gabbard, who stood up for Bernie when Elizabeth Warren and the media accused him of being sexist, who sued Hillary Clinton after Clinton indicated that Russia was supporting Bernie and who wrote an article accusing the intelligence community of rigging the election after the intelligence community was attributed with unsubstantiated accusations that Russians were supporting Bernie. 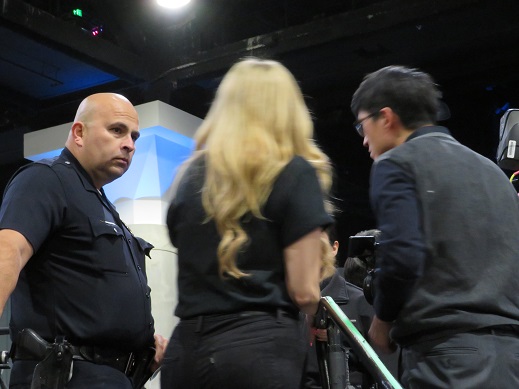 But external problems aren't all that Bernie has to worry about. In every campaign, there is the issue of delegation. Candidates have to trust their staff. People running for office do not have the time to monitor all the people working for them. Concerns about the staff sabotaging Bernie were high at his Los Angeles event after invited members of the independent media were subjected to threats and removal from the press risers to make way for corporate media reporters who routinely report against Bernie. These invitations to independent reporters promising assigned spaces on the risers were in writing but independents arrived to find no assigned spaces and an over-crowded back section with reporters squashed together, tripping over each other and over the cords while the corporate media was given lots of room up front. Some of the independent media who had received written invitations to be on the risers but were removed were pushed into a dangerously crowded situation in a small area on the floor in front of the raisers where some tripped and those not standing on chairs often had extreme difficulty taking pictures of the event they had traveled miles to report on. The treatment of the independent media appeared to be a fire hazard but the staff did not seem to care about that. Though the corporate media was late in arriving and there were blank spaces in the front part of the risers with nobody in them, the police were called in to remove any invited independent reporters moving forward to get away from the hazardous conditions in the back. Disabled reporters were removed from the risers. Some reporters were separated from their possessions and one reporter experiencing chest pains was separated from her medicine. An out-of--state reporter said that this was typical of the treatment of the independent media at Bernie events in other states. It is not the corporate media that has made Bernie Number One and there was a lot of anger expressed by independents over being taken for granted and abused, the word several used to call their treatment. This is something the campaign needs to clean up in order to promote Bernie in a positive way. Good press does matter. Several of the invited independent reporters said they were owed an apology from the campaign. 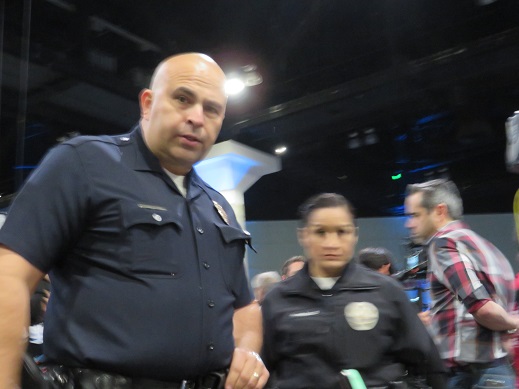 The voter suppression has reportedly also affected Tulsi's campaign in states where there are indications that significant numbers of her votes have not been counted. The fallacious attacks on her continue to come, reportedly in retaliation for her quest to end the wars. The military industrial complex has unlimited funding. Because of the media silence and suppression of her voice, a great many Americans have been falsely led into believing Tulsi has dropped out of the race. What is surprising is that, in spite of all that, she is still packing venues and those who attend her events are or wind up being enthusiastic supporters.

While Bernie will have to fight the reported DNC plans to steal the nomination from the popular winner, he will also have to fight those who want to force him to pick a corporate Vice President. The moment he tries to end a war, he likely will be greeted with the same negativity seen over the last three years in response to any talk of withdrawal or peace. He could even face impeachment from establishment foes trying to stop his Medicare for All plan. Having Tulsi on the ticket will protect Bernie's Presidency against attacks. While the people who see Tulsi love her, Wall Street and the military industrial complex despise her more than they do Bernie. The combination is likely to lead to an undefeatable eight years of prosperity for the ninety-nine percent.

Henry has been a professor of political science and legal ethics and an advisor to many successful candidates for public office. He is currently working on a book about the inequality crisis in America.
Related Topic(s): Bernie Sanders 2016 Presidential Candidate; Bernie Sanders Presidential Campaign; Bernie Tulsi; Tulsi Gabbard; Vote Rigging; Vote Suppression; Voter Disenfranchisement; Voter Fraud; Voter Fraud; Voting, Add Tags
Add to My Group(s)
Go To Commenting
The views expressed herein are the sole responsibility of the author and do not necessarily reflect those of this website or its editors.