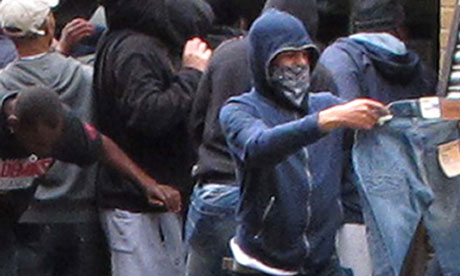 I keep hearing comparisons between the London riots and riots in other European cities -- window-smashing in Athens or car bonfires in Paris. And there are parallels, to be sure: a spark set by police violence, a generation that feels forgotten.

But those events were marked by mass destruction; the looting was minor. There have, however, been other mass lootings in recent years, and perhaps we should talk about them too. There was Baghdad in the aftermath of the US invasion -- a frenzy of arson and looting that emptied libraries and museums. The factories got hit too. In 2004 I visited one that used to make refrigerators. Its workers had stripped it of everything valuable, then torched it so thoroughly that the warehouse was a sculpture of buckled sheet metal.

Back then the people on cable news thought looting was highly political. They said this is what happens when a regime has no legitimacy in the eyes of the people. After watching for so long as Saddam Hussein and his sons helped themselves to whatever and whomever they wanted, many regular Iraqis felt they had earned the right to take a few things for themselves. But London isn't Baghdad, and the British prime minister, David Cameron, is hardly Saddam, so surely there is nothing to learn there.

How about a democratic example then? Argentina, circa 2001. The economy was in freefall and thousands of people living in rough neighbourhoods (which had been thriving manufacturing zones before the neoliberal era) stormed foreign-owned superstores. They came out pushing shopping carts overflowing with the goods they could no longer afford -- clothes, electronics, meat. The government called a "state of siege" to restore order; the people didn't like that and overthrew the government.

Argentina's mass looting was called el saqueo -- the sacking. That was politically significant because it was the very same word used to describe what that country's elites had done by selling off the country's national assets in flagrantly corrupt privatisation deals, hiding their money offshore, then passing on the bill to the people with a brutal austerity package. Argentines understood that the saqueo of the shopping centres would not have happened without the bigger saqueo of the country, and that the real gangsters were the ones in charge. But England is not Latin America, and its riots are not political, or so we keep hearing. They are just about lawless kids taking advantage of a situation to take what isn't theirs. And British society, Cameron tells us, abhors that kind of behaviour.

Related Topic(s): Economy; London Riots; Protest; Riots, Add Tags
Add to My Group(s)
Go To Commenting
The views expressed herein are the sole responsibility of the author and do not necessarily reflect those of this website or its editors.