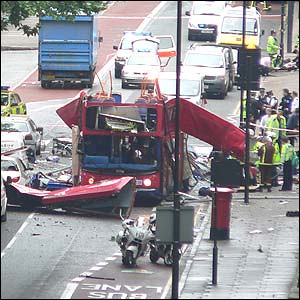 Five dead, including one police officer, with 40 injured, seven of them seriously -- this is the human toll of yet another terrorist atrocity on the streets of a major European city, on this occasion London.

The banality of such attacks by now, their dreary regularity, should in no way be allowed to minimize their impact on multicultural societies and cities, where millions of people of all faiths and none live cheek by jowl and have done for decades. The risk that the fabric of those societies may be ruptured, if not in time ripped apart, is a pressing one, and every effort must be made by politicians, religious leaders, the media, and all people of goodwill to ensure that it does not happen.

Sadly, we have now come to accept that these attacks are a matter of when, not if, despite the security measures and efforts expended by police and intelligence services to prevent them before they occur. And by now predictably, whenever such attacks erupt, political leaders and establishment voices rally round with the same tired platitudes praising the bravery of the police and other emergency services, assuring the public that "we" will not be defeated by terrorism, that the motives involved in such deranged attacks are either the fact they hate our freedoms, the fact that we live in open societies, and that we cannot and must never allow them to turn against one another.

So-called security experts are rolled out across the media to dissect and analyze the nature of the threat posed by this menace. Flags are flown at half-mast and a minute of silence is observed. And of course, as is now customary, people will superimpose the flag of the country where the attack takes place, in this case the UK, on their Twitter or Facebook profiles as a gesture of collective defiance and national solidarity.

In other words, these by now ritual attacks are met with the same ritual response before the media and everybody else moves on, having learned absolutely nothing -- or at least nothing that is worth learning.

The deranged individual -- or indeed individuals, as it may turn out -- carried out his deed on the basis of a sick, twisted, and dangerous ideology. As with the countless others like him who have come and gone, and the others who are yet to appear, he was an alienated human being who sought and found meaning in this ideology -- one that values death more than life, and which holds at its heart a Manichean worldview in which modernity and Islam are deemed incompatible.

However this is only one side of a two-sided coin, which is where we come to the heart of the matter. For this sick and dangerous ideology of religious extremism and fundamentalism is in the last analysis the product of the even sicker and more dangerous ideology of Western regime change. The idea that you can set fire to countries in the Middle East, collapse their societies and traumatize entire populations, sowing carnage on a biblical scale, and not expect any reaction in the form of blowback, is utterly insane.

Even worse is the notion that you can impose the cultural and political norms of Western liberal democracy on other parts of the world, regardless of regional, cultural, or historical specificities. Countries and societies do not develop according to blueprints drafted in Western capitals. They are not the product of a preconceived Western-centric moral paradigm. They develop instead according to concrete economic, social, and cultural factors -- factors which themselves are a product of specific histories.

When Theresa May and members of her cabinet regale the British people with Churchillian rhetoric about fighting terrorism, they insult those who actually have been and are fighting terrorism and have been consistently demonized by the British, French, and US governments in the process. Syria, Iran, and Russia are the countries that are in the front-lines resisting this menace, yet rather than offer support or assistance to them in this struggle, the West has been doing its utmost to impede and undermine their efforts.

Let us envisage for a moment the following scenario. Instead of deploying British troops to Estonia with the aim of keeping the big bad Russian bear in check, imagine if those troops had instead been deployed to Syria as part of a multinational force fighting alongside Russia, Syria, and Iran against Daesh and other Salafi-jihadi groups. Imagine if Russia, France, the UK, US, and every other country in the West and Middle East that is sincere about confronting and defeating this menace established an international coalition to coordinate their efforts, one that confronted terrorism in all its particulars -- i.e., militarily, ideologically, and so on.

Imagine in such a scenario how different the world might be, and how much progress would be made when it came to dealing with an equal opportunities scourge that knows no borders when it comes to unleashing the slaughter of the innocents.

In the meantime, while we are waiting for such a world to materialize, perhaps British Prime Minister Theresa May and US President Trump may wish to consider asking Saudi Arabia's King Salman a few questions the next time their closest Arab ally and longstanding customer for arms sales deigns to pay them a visit -- questions, for example, concerning the role of Saudi state-funded Wahhabi preachers in spreading a message of religious extremism and sectarianism to the faithful: questions concerning their fixation with slaughtering "infidels" and "apostates."

Until they do ask such questions, and act according to the answers, then neither the UK or US are serious when it comes to combating terrorism.

John Wight is the author of a politically incorrect and irreverent Hollywood memoir -- Dreams That Die -- published by Zero Books. He's also written five novels, which are (more...)
Related Topic(s): Blowback; London Attack; Terrorist Attack, Add Tags
Add to My Group(s)
Go To Commenting
The views expressed herein are the sole responsibility of the author and do not necessarily reflect those of this website or its editors.