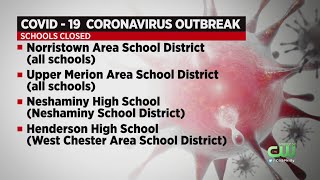 Maple Glen, PA I'm writing this article from my home in Montgomery County, PA, a large suburban, exurban and rural county of 900,000 people which is kind of wrapped around three sides of the city of Philadelphia. At the moment, we are in "lock down," after PA Gov. Tom Wolf announced that MontCo is the "epicenter of the pandemic."

Gov. Wolf yesterday ordered all elementary and secondary schools in the county closed effective today for at least the next several weeks, and ordered all colleges, including Montgomery County Community College and the Ambler campus of Temple University to end classroom teaching, switching over to online teaching. He also asked all retail stores to close their doors for a few weeks, excepting food stores, pharmacies and gas stations.

The suddenness of the order caught residents by surprise. Parents have been scrambling to make arrangements for their young children not easy since child care institutions are also shuttered, and help or sitters can be hard to find.

There is an element of panic, since it's becoming clear that the pandemic is much worse than people up until now had been led to believe. In this so-called "epicenter," for example, the number of "presumptive" cases of COVID-19 invention is currently 17 (since testing kits are scarce in the US, only six of the PA cases have been tested and they were all positive). That's just about half the state's total of 33 as of today. One MontCo resident has died so far, in a hospital in Philadelphia.

What is finally being made clear in the media is that because the Trump administration first cut staffing for epidemics at the Center for Disease Control over the last two years, and was very late to start producing COVID-19 test kids, only 5 people per million have been tested nationally so far (that compares to 3600 per million in S. Korea!), and testing is being rationed, with many reporting symptoms and asking to be tested being turned away by health care providers. Tests can also cost more than $1000 and in Montgomery County, as across the nation, about a quarter of the population is either uninsured or has a cut-rate insurance plan that doesn't pay any benefits until the insured person has paid the amount of the annual deductible, which can often be thousands of dollars or even as much as $10,000.

As a result we are learning that the true number of infected people in a state the size of Pennsylvania, rather than being tallied in double digits, could be as high as 100,000 already, with the vast majority of those infected not knowing if they have or are contagious with the disease. State health officials in Ohio and Washington have stated this openly, but most states are not being so forthright, perhaps fearing that it will sow panic.

For this reason, it seems clear though, that the restrictions being imposed here in MontCo will not be temporary, ending in a few weeks, but will if anything become stricter and much longer-term"