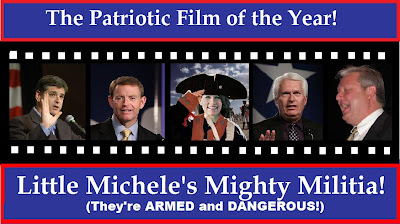 (Author's note: Yes, this is the most linked article I've ever done bar none, on a subject that, by now, people have been bombarded with ad nauseum, but if you follow those links, I guarantee you'll find out some things about Michele Bachmann and her supporters in a different perspective - some of them are hilarious, some are outlandish, but all are extremely revealing)

BACHMANN GLEEFULLY HANGING HERSELF - WITH A LOT OF HELP

Everyone knows that California loves its crazies: San Francisco once honored a man who said he was the Emperor of The United States and Protector of Mexico.* Now Iowa has followed suit in having honored Michele Bachmann. There is, however, a big difference between California's penchant for lunatics and Iowa's: California's crazies have always been more benign.**


Michele Bachmann's delusions are toxic and she doesn't seem to know it ... or care. It's as if she lives in her own fantasy world of Bachmann reasoning, Bachmann morality, Bachmann patriotism. Facts and figures are fun playthings at her disposal and she has a wonderful time flinging them about. And while interviewers scratch their heads and say "Huh?", she skips along her merry way sing-songing "I'm right! I'm right! I'm right!" And she sidesteps gaffs with a "ho hum" attitude that is infuriating, like an obnoxious, waaay too perky little girl, a deranged Shirley Temple you'd most likely strangle if given the chance.

Of course, she might do the dirty deed for us - if the men in her campaign give her enough rope. And many of them look crazy enough to do just that.

For instance, Sean Hannity has proven to be the one pundit that Bachmann can count on to help pull her out of tight spots on her Good Ship Folly Pop: as a Fox minion, he dutifully slammed Obama while giving her a pass about the now-famous Gacy Gaffe. He even let her slide into one of her favorite Bachmannisms: "the point is..." Neither Chris Matthews nor Anderson Cooper would ever let her get away with such sidestepping.*** Continuing with the "liberal media assault" on Bachmann, Hannity leveled his sights on Alec Baldwin's tweet about Bachmann and brought in Ann Coulter(geist) to ride shotgun (see video). That might not have saved Hannity a room at the local asylum, but we are talking about a "journalist" who's first big attack on Obama was "Dijon-gate."

Tony Perkins (Family Research Council) has always returned the favor Mrs. Bachmann did for him by pointing out how she has been a champion for family values and the FRC. And, fortunately, Bachmann has never addressed the issue of the FRC being named a hate group for its anti-gay propaganda by the Southern Poverty Law Center. Such loyalty is to be admired.

Bryan Fischer (American Family Association) gave Bachmann the first boost to her campaign when he interviewed her last March, so it's no surprise that he ran to her defense amidst the "liberal" laughter created by the Gacy gaffe:

So liberals, by going out of their way to snarkily remind us of John Wayne Gacy, are inadvertently reminding us of the clear connection between homosexuality and pedophilia, which isn't the smartest thing they've ever done.

Other people in the Michele Militia of supporters are:

- Supreme homophobe and "minister" chastised for his prayer in the House of Representatives, Bradlee Dean

Rev. Dan Vojir is has been writing/blogging on religion and politics for the better part of ten years. A former radio talk show host (Strictly Books €" Talk America Radio Network) and book publisher, Dan has connected with some of the most (more...)
Related Topic(s): Anderson Cooper; Anti-gay; Bachmann-Michele; Bryan Fischer; Chris Matthews; Craziness; Gay Equality; Marcus Bachmann; People Matthews Chris; Pray Away The Gay; (more...) Sean Hannity; Southern Poverty Law Center; Subsidies, Add Tags  (less...)
Add to My Group(s)
Go To Commenting
The views expressed herein are the sole responsibility of the author and do not necessarily reflect those of this website or its editors.